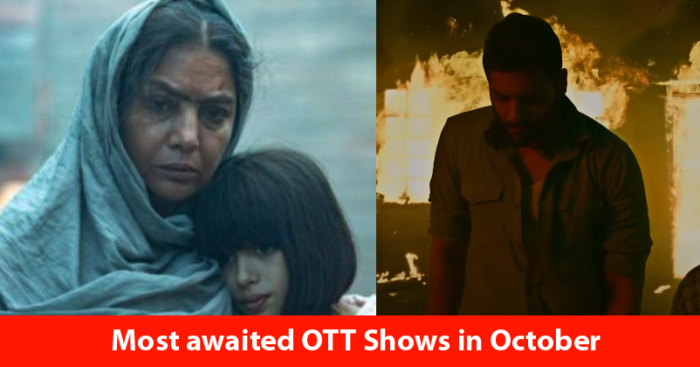 We are loving this quarantine as we get to stay at home and bing watch so many new shows available on different OTT platforms like Amazon Prime, Netflix, Disney+Hotstar, Voot, Sony LIV, and more. The below-mentioned shows are definitely going to spice up the holidays this year, as 2020 is almost nearing its end! Are you as excited as we are? Which of these shows are you going to watch?

It has been 2 years since the first season was released in November 2018. This series has the right amount of drama, action, and mystery that ties all the characters together. and finally, we will get to know what happens next in the lives of Guddu Pandit, Golu Gupta, Akhanda, and his son Munna Tripathi. We are expecting all sorts of gut-wrenching plots that will do justice to season 1 this time. Mirzapur Season 2 will be live on October 23rd, 2020 only on Amazon Prime.

Based on the book by Vikram Seth, the series ‘A Suitable Boy’ will have actors Tabu and Ishaan Khatter in the main roles. It will have only six episodes portraying the life of a literature student, who tries to balance her personal life and education, as she is wooed by different lovers. This is definitely going to be a good watch and we cannot wait to see how well this is adapted on Netflix, on 23rd October 2020.

Actress Shabana Azmi is making a comeback in the horror genre after her stint in the 2002 movie, Makdee. In Kaali Khuhi, a 10 year old girl has the mission of saving her family in Punjab from the ghost of its past. For all horror lovers out there, this film will definitely give you the chills. Watch Kaali Khuhi on Netflix on 30th October 2020.

This stand-up comedy featuring Shweta Basu Prasad and Saqib Saleem revolves around a couple who do comedy shows for a living. Life may be quite comical on stage, but in reality, the couples fight about the exact same issues they joke about! How contradicting, yet entertaining! Watch the show on Zee5

This short film has actor Shweta Tripathi who is an adult bed-wetter even at her age! Her marriage is two days away and her bedwetting rituals won’t really appease her in-laws, let alone her husband! Shweta Tripathi will definitely woo the audience through Mirzapur Season 2 this Friday, and this new film will also be added to her list of short and sweet engagements. Watch Laghushanka on SonyLiv!