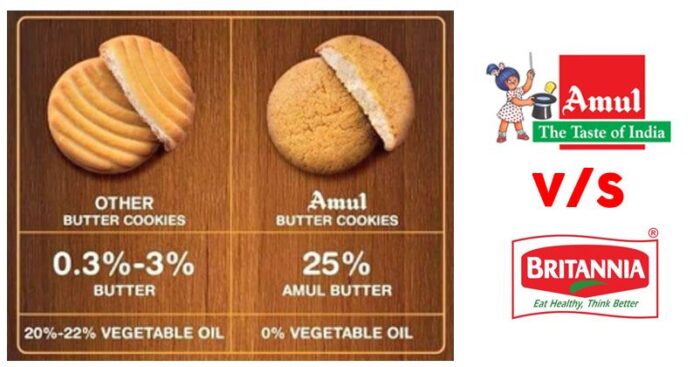 Recently, the two biggest consumer goods brands of the country got involved in an ad war. Amul & Britannia have made the news after they targetted each other.

The ad did not necessarily name its nemesis,i.e., Britannia, but the biscuit in question was clearly their product.

In response to the ad, Britannia released an ad that would have certainly got Amul‘s attention. Without naming anyone, Britannia‘s ad posed a question which stated, “How much cholesterol does a 25% butter cookie have?.” The ad further read,” Approximately 7 times of cholesterol.”

The response by Britannia was hailed by many brand experts who saw the wit in Britannia‘s marketing team for pointing out the obvious health risks a high amount of butter content would actually have on consumers’ health.

People took to twitter and the ad war went viral in no time.

And finally, the empire strikes back! The big daddy of Indian biscuit empire fires the long-overdue salvo against Amul’s skirmish almost after a month! A sentence from my original post (see: Amul Vs. all of India’s ‘butter cookies’ https://t.co/xDUufe9ksf) was, “Is it healthy 1/5 pic.twitter.com/CZ5nch2z7o

iTWEET:Remember! In Marketing, Love & War, when you open a front to attack, you are prone to a counter-attack through that very front! #Amul #Britannia #Parle #Biscuits #Love #War #Marketing #Brands #India #TheCookieWars pic.twitter.com/U36dFcjA4Q

The Ad war between #Amul and #Britania over butter cookies has taken the #branding & #Advertising game to next level
.
Have you tried @Amul_Coop butter cookies, I'm a huge fan of it 😋 pic.twitter.com/L2AJcObab0

Such battles between the brands have always been beneficial for consumers. In order to prove their metal, some brands try to serve with better quality products & services than their competitors.

The Advertising Standards Council of India (ASCI), a self-regulatory voluntary organization of the advertising industry, has also made a statement regarding the comparative advertisement. Shweta Purandare, ASCI‘s secretary-general has said that such comparative ads have been pretty common and well in the lines as long as they do not make any falls claims.