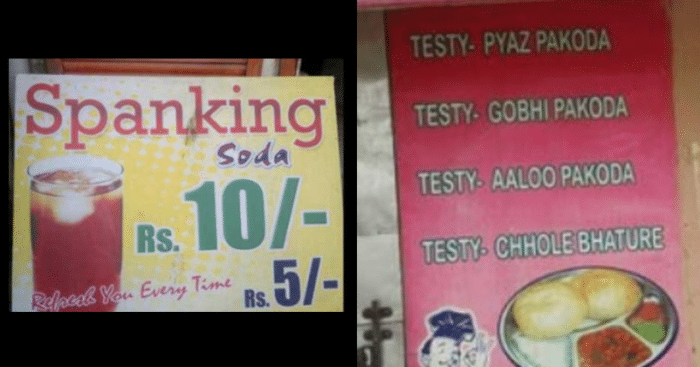 India is home to so many different cuisines. With such different cultures in every city, one can experience a different style every day.

Along with tasty food, Indians are also good at coming up with some hilarious words for their menu and signboards. It takes a lot of courage to speak a language you don’t know but to do it wrong and that too with confidence is something we Indians are really good at.

Take a look at some hilarious errors in local restaurant menus and signboards.

Most of us have tried chicken in our lives but have anyone of you had ‘Real Chicken’? Hmmm… Wonder what it tastes like..

Ice-creams are meant to make you happy. Not make you scream out in pain… Leeches with ice cream is not my kinda dessert anyway.

One has to be dumb to not like something as great as a biryani. But what can I say about a ‘Dumb’ Biryani? Well! Will have to give it a try for sure.

For those who know what nodules are, know that this soup can never be appetizing for anyone. Is anyone brave enough to try it?

Have you been bad lately? you could use some ‘spanking’ i guess… I meant the soda!… Geez!

Tibetan food can be very tempting but would not say the same for Tibetan Moms, with all due respect.

So Much is Going On Here

So much to say. So much to ask. This menu has left us speechless.

‘Tasty’ Is so over-rated

We all know a friend who would love to visit this place.

Stop ‘Whining” have a Drink

Lack of wine can definitely make you whine… The name actually fits in a way.

It’s all in the soup

There is nothing like a bowl full of ‘Hard & Shaver’ soup. Comfort food for so many. Isn’t it?

Have a hearty breakfast and launch yourself to dinner I say… Why wait?

For The Goth In You

Sand-‘Witch’ anyone? And the best… they deliver it for free!!