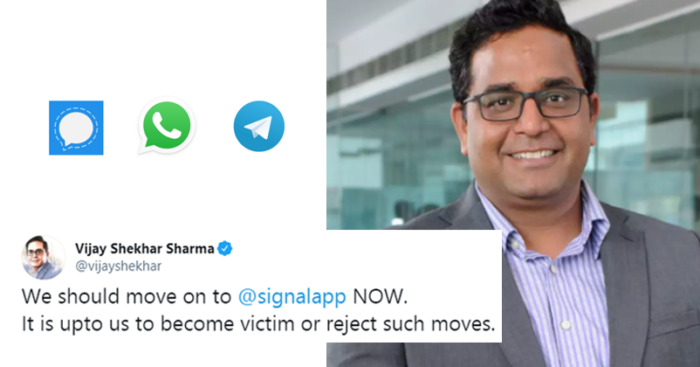 The new updated privacy policy of WhatsApp has become the talk of the year and not in a positive way. With WhatsApp indicating that it may share the user data with Facebook, people have started calling out the messenger app company on social media and even pledging to give it up altogether.

In just a matter of days, the brand’s popularity has dropped tenfolds and other apps like Telegram & Signal are gaining attention worldwide. Soon after the privacy policy was announced, Elon Musk tweeted in support of Signal App and it became the top-rated application on the App stores.

People have since started switching to the Signal and Telegram app and it looks like things might get tougher for WhatsApp and Facebook. Following Elon Musk’s post, many prominent Indian Entrepreneurs have also taken to Twitter to announce their exit from the social media platform.

Chamath Palihapitiya, CEO of Social Capital expressed his disappointment on his Twitter handle and asked people to no longer contact him on Whatsapp, instead urged people to download Signal App.

Starting in Feb, WhatsApp will begin sharing all kinds of data with Facebook. They just killed their best feature – privacy.

Please no longer text me on WhatsApp. Download @signalapp

Vijay Shekhar Sharma, founder of financial technology company Paytm joined the list of entrepreneurs to urge people to switch to Signal App. He wrote, “They say, the market has power. We are the largest market. Here in India WhatsApp / Facebook are abusing their monopoly & taking away millions of users’ privacy for granted. We should move on to @signalapp NOW. It is upto us to become victim or reject such moves.”

They say, market has power. We are the largest market.
Here in India WhatsApp / Facebook are abusing their monopoly & taking away millions of users' privacy for granted.
We should move on to @signalapp NOW.
It is upto us to become victim or reject such moves. https://t.co/iCmKoyLc5x

Bipin Preet Singh announced that he will be switching to SIgnal & Google Chat for professional and personal use.

Moving to Signal (personal/professional) and Google chat ( for work). Latter mostly because of Gsuite but really UX of GChat shows why they don’t get social/messaging.

CEO of PhonePe Sameer Nigam retweeted Kunal Shah who stated that leaving WhatsApp is a ‘Futile’ move. Nigam expressed the need for the switch and explained why it is easy to make the switch easily.

This time is diff. Product wise, Signal has arrived!

Looking at all the commotion around the privacy policy, only time will tell if this year will mark the end of the iconic messaging app that has become a part of our day to day lives.