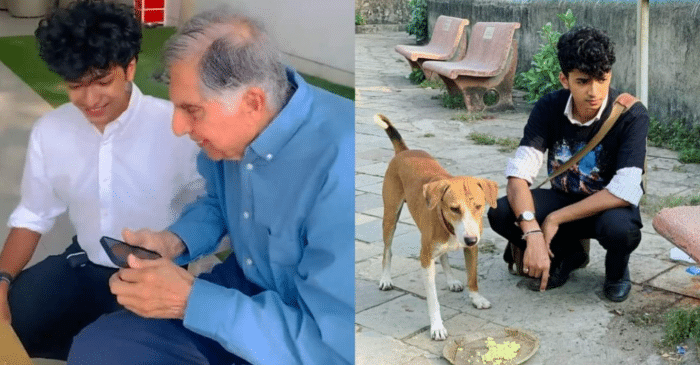 This man needs no prior introduction. Ratan Tata-one of the biggest names in the Indian Industry, the former chairman of the Tata Group, currently heading it’s charitable trust. Not only is he a successful industrialist but a man of morals, virtues and simplicity as well. Recently a video went viral all over the internet on the eve of his 84th birth anniversary where he is seen to be cutting a cupcake in the presence of a young boy by his side and since then netizens can’t stop guessing who this young boy with Ratan Tata is.

A charming scene with the unassuming #RatanTata on his 84th birthday pic.twitter.com/wkmm7jhCyZ

Let us clear all your doubts on this. The guy beside Ratan Tata celebrating his birthday is none other than his assistant and millennial friend Shantanu Naidu. At the age of only 28, a young Shantanu Naidu has achieved a position in the business industry which a lot of people aspire and can just dream of. AS we know of, Shantanu Naidu is the man behind all the business suggestions and tips given to Ratan Tata for investing in startups. Shantanu Naidu was born in 1993 in Pune Maharashtra. He is a famous Indian businessman, engineer, junior assistant, DGM, social media influencer, author, and entrepreneur. Shantanu Naida is very popular across the country as a deputy general manager of Tata Trust. Not only that, Shantanu Naidu, an MBA from Cornell University is the fifth generation of his family to be working in the Tata Group.

How it all started

It was a dream come true moment for Shantanu when Ratan Tata invited him for a meeting after coming across his Facebook post where he wrote about dog collars he had made with reflectors for stray dogs so that drivers can spot them on the roads of Mumbai. Being a student organization, the funding to create these collars was not enough. So, they decided to use denim pants as a base material to make the collar by collecting denim pants from different households and making 500 reflective collars in Pune and collaring 500 dogs.


The dogs wearing these collars made by him could be seen by drivers from a distance even without street lights at night and hence the lives of street dogs could be saved. His work was noticed by many people and numerous online comments started coming in his post about how the collars helped the dogs to be visible and by leading people to slow down.
As Naidu’s work started getting all the attention, it was highlighted in the Tata company’s newsletter which got him an invitation to Mumbai from Ratan Tata himself, the former chairman of the Tata group and an animal activist. In 2016, Shantanu Naidu went to pursue his MBA at Cornell University, in the US. When he finished his degree and came back in 2018, he joined Tata Trusts as the Deputy General Manager in the chairman’s office.
The duo developed a deep friendship over the years by discussing and sharing knowledge on different subjects and backgrounds they excelled in. Infact, it was Shantanu’s millennial impact that turned Ratan Tata into a social media star which we can very clearly see when it comes to his Instagram handle- even at the age of 84, Ratan Tata is one of the few selected businessman with a highly engaging Instagram handle.


Not only that, Shantanu taught him all about social media trends, emojis, lingos and hashtags as well. Apparently Ratan Tata has more than 5 million followers on his Instagram handle.
Moreover, Shantanu even launched a ‘companionship company’ GoodFellows, that aims at providing intergenerational friendships, just like his own with Ratan Tata. Employing young, educated graduates up to the age of 30, the startup aims at helping to reduce the loneliness of elderly people by making them friends with the younger generation. Isn’t it a great initiative in itself?
Last year the youngster launched his book ‘I Came Upon A Lighthouse: A Short Memoir Of Life With Ratan Tata’, which explores and gives insights into the relationship shared between him and the business tycoon- Ratan Tata.

Friendship has no boundaries- a well said and now a well proven proverb by Shantanu Naidu and Ratan Tata. Shantanu has undoubtedly seen the path of success at a very young age and has got the opportunity to learn and share knowledge from the business tycoon himself which in itself is a great achievement. We await more such stories and instances related to their lives which is memorable as well as inspiring at the same time.