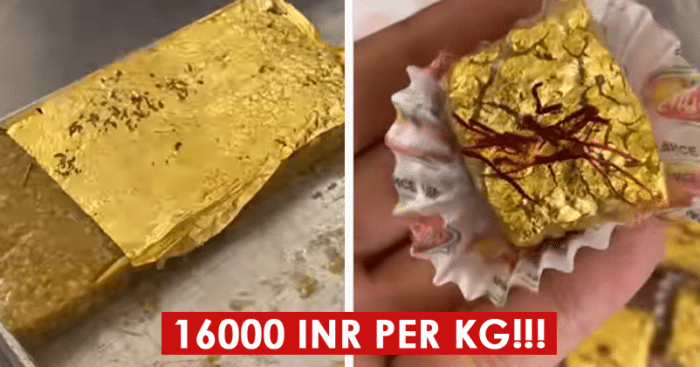 Indians are generally sweet-spoken and sweet lovers at the same time. Nevertheless they love to experiment new ways when it comes to trying out their favorite delicacies whether it be piping hot Rasgullas or Kaju Katli- Indians always have their preferences sorted. Speaking of Kaju Katli- a popular sweet dish usually covered with silver foil that tastes heavenly. But, have you seen or had any such Indian sweet covered with gold yet?
Yes, you read that right! Well, there is now an Indian mithai that is plated with gold. The gold-plated mithai is worth Rs. 16,000 per kg and it is being sold in a shop named Shagun Sweets located in Maujpur, Delhi.

In a recent video shared by food blogger Arjun Chaunhan who runs the page oye.foodieee the entire process of how this gold-plated mithai is prepared was shared in detail. The video shows how a certain kind of sweet is made and then coated with a layer of gold foil. It is then topped with some saffron or kesar.
Where in one hand people were full-enthusiastic and excited to discover such a new type of mithai, on the other hand some of them were quite not satisfied with such experimentation and stated it was not worth it. However, the comments came from both ways and made this gold-plated mithai an internet sensation in no time.

This is not the first time that we are experiencing such unique innovation when it comes to food. Previously, the Royal Gold Biryani was launched by Bombay Borough, a luxury dining space in Dubai International Financial Centre (DIFC), as part of their special anniversary celebrations where we witnessed the same kind of experimentation in the form of gold-plated biryani.

When it comes to food and innovation, no body can beat the Indians. Yet another brilliant example of how uniquely one can present the popular Indian delicacies. This experiment might have gathered a lot of fan following as well as criticism at the same time but what stands out from all of this are the efforts and the out-of-the-box way of thinking through it.