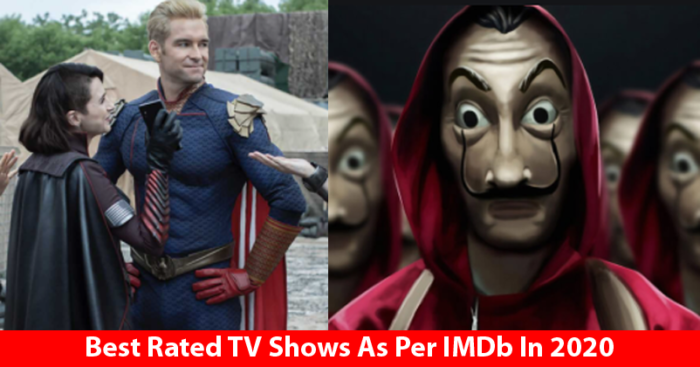 With December kicking in, are you waiting to start some new TV shows? The cozy weather, warm blankets, and the right company definitely call for a binging session!

Recently, IMDb came out with the best-rated TV shows of this year. These have been viewed and loved by many fans across the world. So if you want to end this year on a positive note, after all, we have equally gone through, it is time to tune in and finish one or two or all of these hyped series!

The most-watched show of 2020 is The Boys. It has superheroes, dreams, and aspirations that are served on an evil platter. Watch the show to know why it has been so trending!

Money Heist drew old and new fans towards its fourth season in a jiffy! It was the second most-watched show this year. Based on a heist to loot the Bank of Spain, the latest season leaves us wanting for more! Bella Ciao indeed!

If you haven’t’ seen Dark yet, you are missing out on some great content by Netflix. Dark features on the 3rd part by IMDb. We saw the last season of this spectacular series this year. It is twisted, fun and everything you can ever imagine!

The Dark features season 3 and garnered instant popularity across several platforms. It made it to the 4th spot on IMDb’s list, becoming one of the major shows that were watched during the pandemic, by the world.

This is based on the Star Wars universe. Hence, it is a great hit for all of us who have grown up watching the Star Wars franchise. You will have to wait another year for the new season!

The Queen’s Gambit is the most trending show by the end of this year. It is a mini-series incorporating a woman chess player, and the world loves it for the wit and humor.

Who doesn’t love Klaus? This show is based on a comic book series, and season 2 definitely showed the characters in a lighter setting. We love it for its supernatural and magical elements.

The Westworld has been IMDb’s top 10 choices for the past 2 years. With the launch of a third season, it has managed to retain its position. This sci-fi show is one of a kind.

Henry Cavil’s The Witcher is based on Andrzej Sapkowski’s novel by the same name. It released at the time of the pandemic this year and instantly received quite the recognition.

The latest season of The Crown created quite the buzz on social media because of Princess Diana’s appearance. The show follows the lives of the royals of England and has brought in characters of the past, including the present.