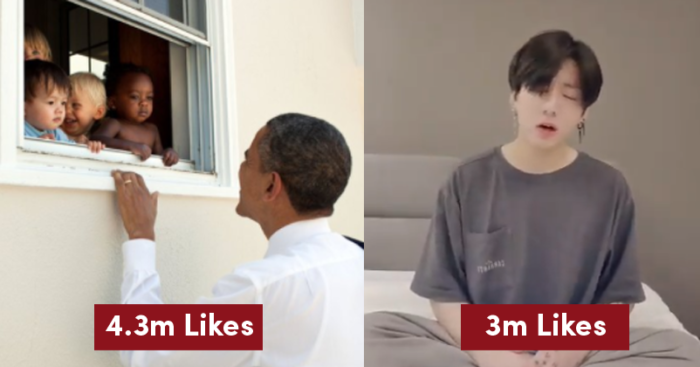 Social media has seen a recent trend of people spreading hatred or bullying one another. This has put off social media for many of us. But today we bring you the top tweets that have received a lot of love over the years.

These are the top 10 tweets that have received most likes yet.

Chadwick Boseman was an American actor who played the iconic role of the  Marvel Cinematic Universe’s ‘Black Panther’. He gained a lot of fame for his role. He lost the battle with cancer and died on 28 August at his residence with his loved ones beside him. His family then later posted on Twitter to inform his fans of his demise which went on to become the most-liked tweet on the social media platform.

"No one is born hating another person because of the color of his skin or his background or his religion…" pic.twitter.com/InZ58zkoAm

Kobe was a legend on the court and just getting started in what would have been just as meaningful a second act. To lose Gianna is even more heartbreaking to us as parents. Michelle and I send love and prayers to Vanessa and the entire Bryant family on an unthinkable day.

Barack Obama expressed his condolence after the demise of the NBA star Kobe Bryant.

Congratulations to the Astronauts that left Earth today. Good choice

The American actor, Macaulay Culkin wished himself Happy Birthday on Twitter with some wit & humor. His post went on to become really popular when his fans came forward to wish him on his big day.

Jungkook is a South Korean singer and songwriter. He is a member of and vocalist in the South Korean boy band BTS.

Earlier in March, Quarantine blues were hitting hard on everyone. One Twitter user became creative in ways to entertain himself and others as well. The video he posted went on to be one of the most-liked tweets.

You can have an edit button when everyone wears a mask

Continuing to move the game forward @KingJames. Much respect my brother 💪🏾 #33644

The NBA star’s last tweet on his Twitter handle has become one of the most liked tweets of all time.

V is a South Korean singer, songwriter, record producer, and actor who has fans all over the world.