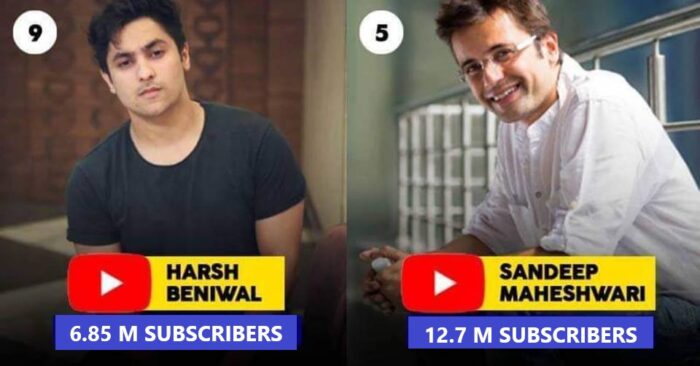 Amit Bhadana is Indian video content creator who is popular for his unique comedy style and dialogues. His videos are loved by people all over the country which has made him the most subscribed YouTube creator in India.

Bhuvan Bam’s YouTube channel named BB Ki Vines stands on the 2nd position with a very narrow margin. He plays all the characters himself and entertains the audience. He belongs to Delhi and apart from maintaining his YouTube channel, Bhuvan is also a musician by profession and earns his living by doing live shows.

Ashish Chanchlani initially gained popularity from the platform Vine and decided to move on to YouTube with his own channel. His content is aimed at the mass audience where he tries to make them laugh.

Gaurav Chaudhary, known for his YouTube channel Technical Guruji, makes videos concerning technology in Hindi. He launched the channel in October 2015 which grew very quickly, and in 2017 Chaudhary launched the second channel dedicated to producing content about his personal life.

Also Read: Top 5 Online Jobs That Can Help You Earn Some Extra Bucks

Sandeep Maheshwari is one of the fastest growing channels in India. Sandeep is also the founder and CEO of Imagesbazaar.com, the largest collection of Indian images. He made this channel to share his views on life and help people discover the true meaning of life. His content is related to personality development, public speaking, and mediation.

Facttechz is one of the mysterious channels in Indian YouTube space as its content creator Rajesh Kumar has never shown his face in the videos. Rajesh makes use of Sony Vegas Pro, Filmora, Videoscribe, Windows Movies Maker for editing and started this channel in 2016.

The man behind this channel- Dr. Vivek Bindra is founder and CEO of Global ACT (Global Academy for Consulting and Training) and has been awarded as “Best Leadership Trainer in Asia” by World HRD Congress & Marshall Goldsmith. He shares videos on business strategies that help people to learn how popular companies work.

Handled by Ajey Nagar, CarryMinati is a channel known for its funny, witty and hilarious content. Ajey belongs to Faridabad and started this channel in VI standard.

This channel aims to help Hindi speaking viewers to succeed in personal and professional goals.

Harsh is known for his ‘Vine’ style videos which are greatly inspired by Bollywood. He has a mammoth fan following on social media too for his comic timing and relatable content. He became famous after a video of him dancing in Delhi Metro on the song ‘Cheap Thrills’ went viral.

Which one do you love the most? Do let us know in the comments section.