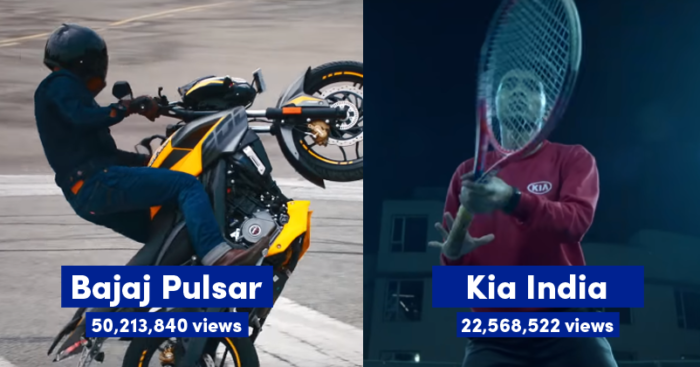 YouTube ads play a vital role in connecting brands with their target market. As the majority of space utilized on YouTube was by smartphones and automobiles, January 2020 was a star-month for these industries.

Here is a list of the top 10 most viewed Indian ads in the month of January 2020.

Starring the Bollywood actor Kartik Aryan in the ad, the Chinese smartphone maker launched OPPO F15. He is seen struck in a black and white mode which instantly changes into a colorful world when he pulls out his sleek OPPO handset.

This fun-filled, adventurous and inspiring ad features a child trying to perform risky stunts like jumping from heights and diving into pools while a voice in the background, probably his mother, keeps calling him in. The climax is even more entertaining as the boy buys a Pulsar on his 18th birthday.

Documented by Kabir Khan and streamed on Amazon Prime, this is the inspiring story of the Azad Hind Fauj. It is a dedication to the untold tale of the “forgotten army” starring stars like Sunny Kaushal and Sharvari.

The ad stars the top 10 selected players, sponsored by Kia Motors who will represent India in the Australian Open 2020. The goal-oriented children are seen smashing their tennis balls where Kia keeps filling the balls for them.

OPPO F15 is ready to keep buyers happy with its 48MP AI Quadcam, ultra-wide angle, night portrait, and many more advanced features. The ad basically shows the phone providing easy access and features it from all angles.

The ad starts with a man swiping through new bike models on his phone when he spots the SP125 bike and chases it with all strength. It ends with a completely transformed man, wearing ultra-advanced gadgets that complement the bike for “advanced people”.

Altroz, the new launch by TATA Motors with the tagline #TheGoldStandard is being marketed as a five-star rated, safest and most affordable car in India, whose price starts from 5.29 lakhs.

This creative ad by Mentos India urges people to make new friends by sharing a Mentos. The campaign speaks about mental health also and aims at bringing people closer.