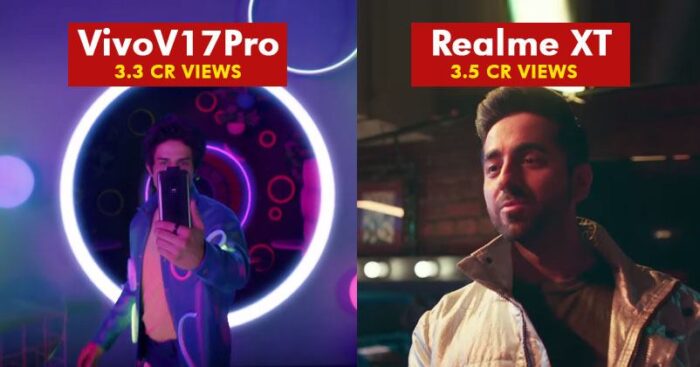 01. Check Out The New #RenaultTRIBER

The ad targets automobile and music enthusiasts who would travel around with their best music on. The ad also blends folk culture and music with western instrumentals such as the guitar, which the duo plays with the others.

Vivo India launches the glass made smartphone Vivo V17Pro that has a 32MP dual pop-up selfie and 48MP AI Quad rear camera. The ad is a simple video that displays and explains all the features of the phone one can get.

The ad has models who portray different stages and situations in life where people fail, break up, come under stress and depression. Samsung Galaxy A70s|A50s|A30s comes with a new camera technology that ensures shake-free videos on the go.

4. Light up the night with #vivoV17Pro

The ad features Aamir Khan who is seen with a child at a carnival. The script shows how the fair gets over the moment they reach the venue but Khan brings in magic with his Vivo V17 Pro smartphone that captures bright and illuminated pictures in the dark too.

Smartphone brand, Realme India introduced its XT series smartphone. The ad features Ayushmann Khurrana who motivates a young man interested in music and looking towards building a brighter future with it. This phone has a 64 MP Quad Camera which captures wide angles and ensures quality videos too.

Vivo India launched an advertisement to promote the first sale of its new VivoZ1x smartphone. The video shows models displaying the different features of the phone through different conceptual activities.

This advertisement by DSP Mutual Fund has captured the right point in the market through which they are garnering traffic and views.

The video tells the story of Dabbu Ji who rose to fame after his dancing video surfaced on social media sites.

Kia Motors India has returned with another top action-packed advertisement featuring our very own, Tiger Shroff. This ad purely displays the rough and tough features of the car — Seltos — that they mention to be inspired by the ‘badass’.

OPPO Mobile India has brought three celebrities in one ad — Ranbir Kapoor, Katrina Kaif and Baadshah. They are seen in front of a cafe where people are celebrating a birthday with a giant chocolate cake that Ranbir brings in closer using the OPPO Reno2 series phone.

The ad delicately captures moments of bonding between a physically challenged girl and her mother. The comments on this advertisement are enough to explain how the smartphone manufacturing company has created an impact on its audiences.