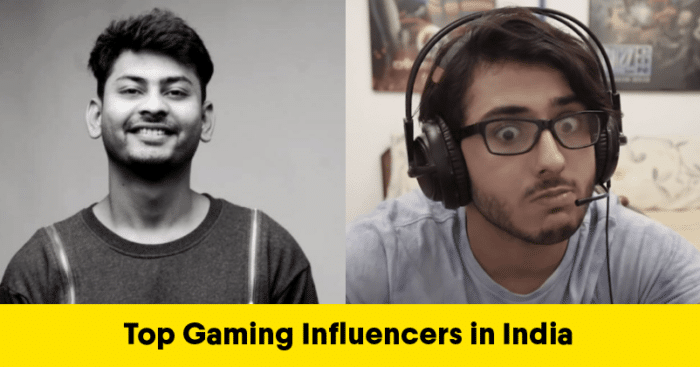 With the gaming industry, growing by leaps and bounds worldwide, India as a contributor has given us some defining moments. In the past 30 years, this industry has gained considerable momentum. With Tirth Mehta winning a bronze medal in card game Hearthstone in 2018 Asian games, to India qualifying for Valorant Conquerors Championship in 2021, the country has seen many developments in the field of gaming.

And now, to add to this, is influencer marketing, which has gained considerable momentum in recent years. From reviewing games, to unboxing latest gadgets to giving live commentary, a gaming influencer does a lot. And India has its fair share of some top gaming influencers that have a major hand in changing the ideology of video gaming. Let’s take a look at some of them.

Ajey Nagar, popular as Carry Minati, is one of the first YouTube influencers who started the culture of roasting people in India. He has 10 million followers on his official gaming channel on Youtube by the name CarryisLive. He is sharp, witty and has a loyal fanbase who can take every word of his for what it is. His knowledge of esports and video games coupled with comedy is a combination that has made him extremely popular.

With 319K subscribers on YouTube, this Gujrati lad loves talking about various PUBG hacks along with other gaming apps. Hindi commentary, some great vlogs, and his quality gaming video reviews make him stand out of the crowd. His distinctive approach is inspiring many youngsters to become gaming influencers.

One of the most creative gaming influencers in the country, he reviews games, suggests ways and hacks to clear video game levels and also collaborates with top brands like One Plus. He loves streaming sessions from DOTA, PUBG Mobile, BF1, BF3 etc. His channel by the name Dynamo Gaming has 9.93 million subscribers and over 1700 videos.

He is well known for uploading gameplay videos of games like Garena Free Fire matches. Gyan Sujan is a popular video creator and gaming influencer with YouTube channel Gyan Gaming having 12.2 million subscribers.

If you are looking for special tricks to ace the most difficult PUBG levels, Naman Mathur is your guy. Ranked as one of the best PUBG players in the world, Naman is known to share latest updates, review tech gadgets, games and gaming platforms. He is also associated with brands like OnePlus and Omlet Arcade as a gaming influencer. He has 6.81 million subscribers on his YouTube Channel MortaL.

From starting his gaming journey with Counter-Strike: Global Offensive and VGA Facecam, to having 5.24 million Youtube subscribers on his channel BeastBoyShub, Shubham is one of the most articulate and funny content creators and gaming influencers. He plays in multiple genres and is known for his funny commentary.

Whether content creators on YouTube or professional gamers, their impact on the audiences and especially the youth has been amazing. So many of them have become assets for videogame developers and distributors, as they are increasingly using their services.