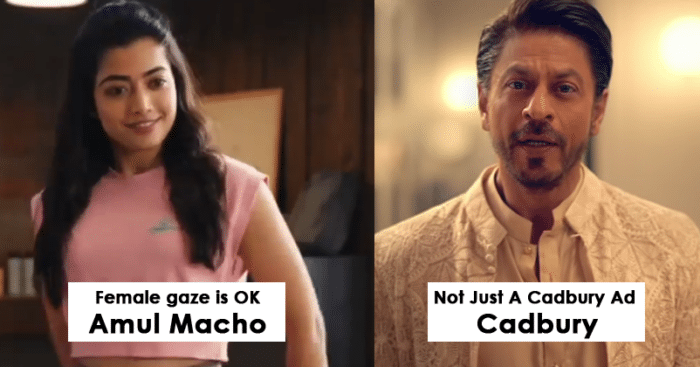 The year has seen a shift from offline to online marketing and the pandemic has definitely brought in a huge and diverse shift in the way brands advertise themselves. From viral moment marketing trends to wholesome and heart-touching ad films, the year has seen it all. The pandemic brought everyone a lot closer intellectually while maintaining a large distance physically. Let’s take a look at some of the most iconic ads being released this year.

Curated by Leo Burnett, this brand delivered the message that it wanted to legitimise the female gaze. Featuring Rashmika Mandanna and Vicky Kaushal, the ad crossed 18 million views in only two months on Instagram.

In the matrimony space of our country, body shaming and skin colour biases parade through town and Dove has been challenging these barriers since times infinity. Real beauty lies underneath all the beauty standards that society sets for us and Dove communicated this message to all through their ad campaign devised by Ogilvy.

Showcasing the true Mumbaikar Spirit, one which has always been helpful, humane and kind, this ad portrays all the brand values that Tata Tea Premium imbibes. A high-end restaurateur who refuses to hire and employee’s brother for lack skills but displays her compassion when she sees underprivileged people taking shelter outside her hotel, is purely beautiful.

Curated by Lowe Lintas, this campaign showcases the beauty of getting engaged which is the first step towards a life long commitment. The ad became an instant hit on Youtube and social media and grabbed the attention of the brand’s target audience brilliantly.

In a country where gender equality issues continue to prevail, this ad proved to be imperative and building dialogue around the issue. The ad campaign generated millions of views since its launch in March and was also curated by Lowe Lintas.

In collaboration with BeYouNick, The Office Canteen is a series of sketches based on real-life scenarios which are typically endured in an Indian office canteen. Based on the style that BeYouNick brings to the table, the creative storytelling made this ad campaign quite a hit amongst the audience.

The message of hope after the Indian economy crashed owing to the Covid-19 imposed pandemic was conveyed mesmerizingly through this ad campaign. The campaign showed us how we can reach out to unorganized sector workers who lost their livelihoods because of the pandemic and generated over 28 million views on YouTube.

8. Not just a Cadbury ad, Cadbury

Featuring Shah Rukh Khan who is seen promoting a local cloth merchant, shoe store, electronic store and a kirana shop, this ad also highlighted the devastating effect that the pandemic had on the Indian economy. Ogilvy crafted this ad to invoke generosity amongst consumers and made an attempt at gaining support to sustain and revive businesses of local shop owners.

These are our top 8 Ad campaigns of the year which we absolutely loved. Which one is your favourite?