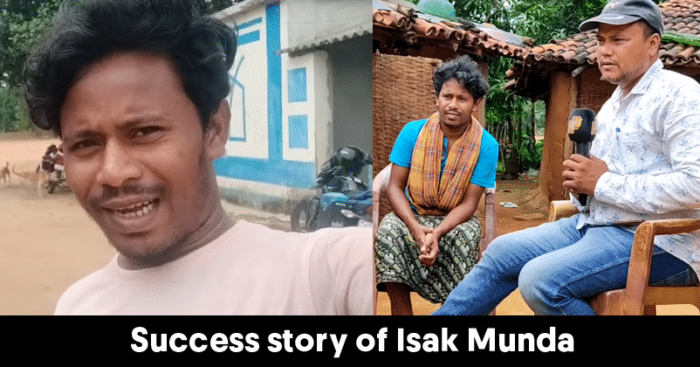 Isak Munda, a tribal man from Babupali village under Jujumura block of Odisha’s Sambalpur district has seen a tough time surviving in dire conditions. In order to distract himself from hunger, the man would watch youtube videos listlessly and a day came when he finally decided to make a video himself. That day changed everything for him and his life took him on a different course entirely.

A daily wage labourer, Munda would watch Youtube videos on his friend’s phone. Inspiration hit hard and he then went ahead and brought himself a 3000Rs cellphone which he uses to make videos of himself.

Although, the content he puts up is nothing out of the ordinary for he only puts up videos that show how he and his fellow villagers survive in a poverty-stricken world. His videos show him battling hunger and how they manage their next meal. His first video in 2020 showed him eating a bowlful of pakhala with an onion and a green chilli. In conversation with News 18, he told them, “I had taken a loan of Rs 3,000 to buy my first little smartphone to make videos. My first video has been viewed by more than 4.99 lakh people. I make videos about life in my poor household and village, showing what and how we eat. I am happy my videos are received so well by many. I am making a decent income now.”

With 750k subscribers, his channel reaches out to a large audience. Today, he earns lakhs of rupees and comfortably supports his family members. Three months after his first video, Munda received Rs 37,000 in his bank account. He told OdishaTV.in, “In August 2020, I received Rs 5 lakh income from YouTube. I have built a house with the money and bailed out my family from the financial crisis. I have also decided to extend help to needy people as per my capacity.”

His videos now even include his family members and he continues to post videos that show the simplicity of his life. They highlight community traditions and how everyday village life in India looks like.

Putting out Youtube videos during covid times has definitely helped Munda make a life for himself, considering everyone has been heavily impacted due to the pandemic. His channel ‘Isaak Munda eating has over 300 videos posted to date.