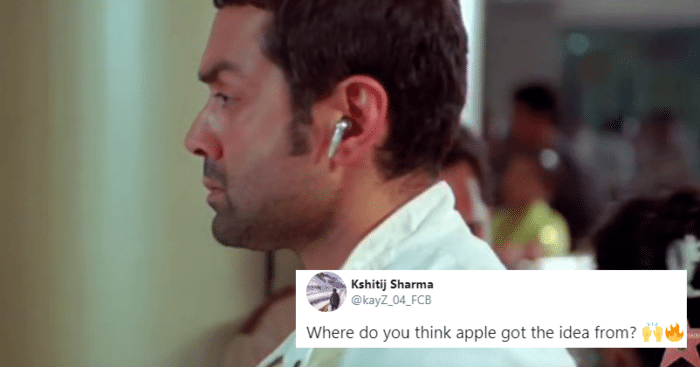 Bobby Deol is one of the old-school actors of B-Town, having mesmerized us mostly in our childhoods with up-and-coming movies. Although his work was never greatly appreciated back then, he made a comeback years later to win our hearts with Class of 83 and Aashram, delivering strong performances back to back.

But turns out, we already knew of his statement level. India has deemed him as uber-cool ever since he hit the screens. Want to know how?

Starting with fresh projects in the early 20s when he won India’s hearts with his ravishing looks and blockbuster fails. Case in point – he did a tremendous job back then, resorting to a long hiatus shortly after.

In fact, it seems that the actor was way ahead of his times, sporting the AirPods (now renowned by Apple) back in 2008. This throwback picture from one of his old films might bring in the realization.

Fans have reacted to this still claiming that he probably came from the future. The Apple AirPods are the newest innovations to bless users in the 21st century. Even though the actor was not REALLY wearing AirPods back then, we can safely say that Apple might have taken inspiration from this film. Don’t you think?

Here are some hilarious reactions from fans on Twitter.

Is there anything in the world this man can't do?

Where do you think apple got the idea from? 🙌🔥

A user also pointed out that the earphones should have been rightly called the ‘AirBobs’, after the actor’s name.

We’re pretty sure the actor is quite tech-savvy in real life, showing his fascination for the same from his old films.

Have you seen him on-screen yet? If not, you might be really missing out!