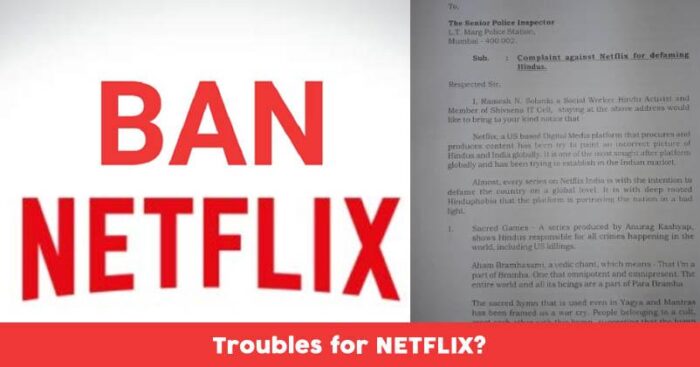 Recently, a certain section of Twitteratis is calling for the online streaming app Netflix in India.

#bannetflixindia has been trending on Twitter recently. Reportedly, it all started when Ramesh N. Solanki, a Hindu activist and member of the Shiv Sena, filed a complaint at Mumbai‘s LT Marg Police Station.

Ramesh Solanki, a member of Shiv Sena IT Cell, has alleged that the US-based online streaming service is “defaming Hindus and India” through shows hosted on its platform.

In the complaint filed by Solanki, he has mentioned Netflix series like ‘Sacred Games’, ‘Laila’ and ‘Ghoul’, along with shows of standup comedian Hasan Minhaj, whom he says are responsible for representing the Hindu religion in a wrong way.

Almost, every series on Netflix India is with the intention to defame the country on a global level. It is with deep-rooted Hinduphobia that the platform is portraying the nation in a bad light.

#BanNetFlixInIndia is trending at 3rd place can we push it to the number 1 spot ?

Followed by his complaint, #BanNetflixIndia was trending on Twitter all throughout Friday.

Netflix is Anti-Hindu as well Anti-India.
showing Hindufobic series.
If Terror has no Religion, then why Netflix links terror to Hinduism !
Censor Board & Govt must take action and… #BanNetFlixInindia @prasoonjoshi_ @PrakashJavdekar @MIB_India@hindustanse @HinduJagrutiOrg pic.twitter.com/iEWqPOMfOt

It's damn easy, did it for our "Dharma"@NetflixIndia can't defame Hindus anymore😡

A Hindu group even took a poll asking whether “a company which does not even respect Hindus and Bharatiyas, have any business being in our country?”

Even though a majority were in favor of this movement but there were some who had a different opinion,

We need to stop this stupid bannetflixindia movement cus its gonna ruin hundreds of childhoods😂
These dumb people are literally having nothing to do .

Why on earth would you want to #bannetflixindia? No thanks!
These are shows. GROW UP!

Another feature for this would be to show context for what some party or politician is saying.
For example, Shiv Sena talking about Netflix when forests are being cut down and cities are submerged/closed down

Aur koi kaam nahi hain? Bombay is suffering due to rains and a Shiv Sena man is targetting Netflix. Waah!

Earlier this year, Akali Dal MLA Manjinder Singh Sirsa had called out filmmaker Anurag Kashyap for disrespecting Sikh community’s religious symbol ‘Kada’ in the second season of his web series Sacred Games 2. It was over a scene from the show where actor Saif Ali Khan‘s character Sartaj Singh is seen throwing away his Kada into the sea.

To comment on who is right and who is wrong is difficult. Sentiments have been hurt but it is true that the nation is suffering from more pressing issues at the moment.

What do you think about the ban?