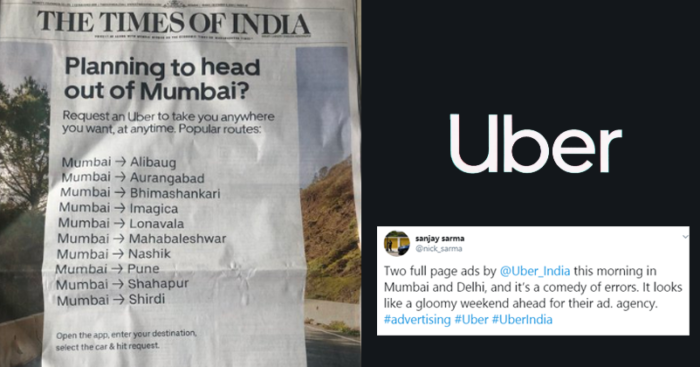 Uber India’s recent print advertisement is getting trolled because of having multiple grammatical errors. Netizens have been after it with all the force. It has been estimated by industry experts that Uber India has spent around Rs 3-4 crore on this campaign and the disaster is making them face backlash of online users.

The errors in the Ad have proved to be very expensive as people don’t expect such errors from a renowned name like Uber. A lot of people are guessing this as a Marketing stunt from the cab service provider.

The advertisement can be seen on the front page of popular Indian newspapers including Times Of India, Hindustan Times, etc. and is published in big cities like Mumbai and Delhi. 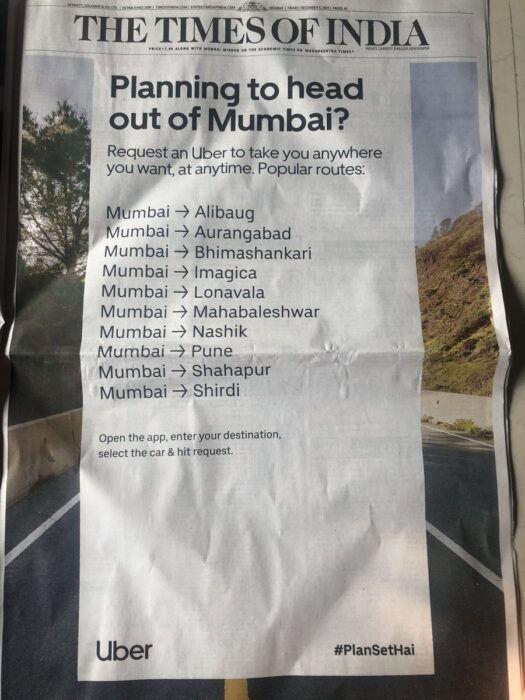 The main grammatical disaster that public is highlighting most are “planning to head to the Delhi” and Bhimsankari misspelled for Bhimsankar.

It may be a strategy to get attention of customers towards the advertisement but is defaming the brand wth such errors really a good idea? People are also questioning the agency behind this campaign- Ogilvy & Mather India. Below are some reactions of netizens:

Is advertising dead? Not yet. It’s just recalibrating itself to new standards. Here is a global client and a MNC ad. agency getting together to spend millions on a full page print ad. with a glaring error in the headline. Nonchalantly. Well done @Uber_India. #advertising #uber pic.twitter.com/8NPUf8wRlh

My dear @Uber_India … please tell me where is “Bhimashankari” located? Probably the copywriter is from #Bengaluru and thought the jyotirling of #Bhimashankar must be a goddess like #Banshankari 😑😡 pic.twitter.com/I9vx04m5al

Two full page ads by @Uber_India this morning in Mumbai and Delhi, and it’s a comedy of errors. It looks like a gloomy weekend ahead for their ad. agency. #advertising #Uber #UberIndia https://t.co/05EgduDeAu

Even though this will not do any harm to the company’s revenue right away but this actually makes the credibility of the brand in danger.

It is not the fault of a single person but a collective blunder from the brand & agency and the agency.

But the real question is: Are such strategies a good way to get quick attention? Will you try something like this for your brand? Share your views in the comments section.