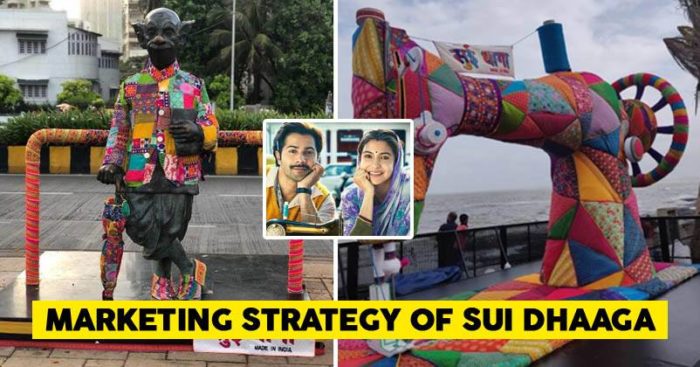 Sui Dhaaga – Made in India was released on 28th September and has so far collected 67 crores at the Indian Box Office. More than anything else, I will always remember it as one of those films which had an innovative marketing campaign. In this article, I am not going to talk about the usual marketing process which is followed by every major film but the unique strategies adopted by the marketing team of Sui Dhaaga : Made in India.

In an effort to celebrate the rich and diverse handicrafts of India, the marketing team reached out to local artisans and craftsmen from across the country to create the logo of the film in their unique stitching styles. As per the reports, it took the team six months to plan, research and execute the film’s logo in 15 different styles from different states of India such as Kashmir, Punjab, Gujarat, Uttar Pradesh, Rajasthan, Tamil Nadu, Odisha, West Bengal etc.

I was thrilled when I heard about this concept. I was actually blown away by this remarkable marketing activity. The logo reveal video on YouTube also has more than 6 million views and a lot of PR was done around this. It was on this day that I realised that movie marketing is indeed limitless.

A trailer launch is a huge event for any big film. It majorly happens in a film studio or a famous theatre or in a top-notch hotel. But, the Sui Dhaaga Trailer launch wasn’t like the usual ones. It was an experience in itself. The set was created keeping the look & feel of the film in mind. 20,000 kilograms of dhaaga was used by 550 artists to create this breathtaking set. The execution took almost 132 hours.

The trailer has crossed more than 37 million views on YouTube. A question that comes in my mind while mentioning the YouTube views is : Would there be any less views had they not created such a grand trailer launch set? The answer is NO. The effort behind the event is to connect with the “Make in India” spirit that Sui Dhaaga embodies in its story.

Heroes Made in India

The idea was clear that the through the marketing campaign, the team wants to celebrate the Young India that’s bursting with ideas and incredible talent. Varun Dhawan and Anushka Sharma decided to meet these young entrepreneurs from across the country and celebrate the spirit of excellence in entrepreneurship. In one of the interviews, Varun said that “We want to bring out their success stories so that they can be an inspiration for others.” YRF has acknowledged the efforts of many such entrepreneurs across all social platforms.

YRF has released a couple of videos showcasing the training which both these actors went through to perfectly enact their roles in the film. Assets like these do play an important role in establishing a more significant top of the mind recall for viewers.

This is one of the best on ground marketing activities which I have witnessed in my life so far. The marketing team of YRF yarn bombed the iconic spots of Mumbai. This innovative strategy doesn’t only popularize the film but also promotes the hard work of skilled craftsmen.

The actor won several hearts when he decided to celebrate the festival with his fans. Clearly, a win-win situation for the film and the audience.

Made in India Sawaari in Jaipur

While promoting the movie in Jaipur, both the actors decided to travel in a car which was created by several craftsmen.

To promote artisans & brands practicing fair trade, the team in association with Fair Trade India decided to launch the Sui Dhaaga website which runs on the following theme:

If you are a fair trade practicing brand, that sells authentic hand-made products, created by artisans across the country, we will showcase you on the website.

Varun and Anushka released a video talking about the eco-friendly Ganpati Bappa which the Sui Dhaaga team had made entirely with threads.
<

Varun & Anushka chosen as the ambassadors of Skill India – a mission by the Indian government for skilled artisans and workforce, to support their self reliance and entrepreneurship just like Sui Dhaaga Made in India.

A teaser of the song was released one day prior to the song launch. In the hilarious video, Varun can be seen arguing with the YRF team that he wants a promotional song in the film and that he will cross all limits to make it. When the YRF team still disagrees, Varun challenges them and says: “Ab aisagaanakarunga main ki muhtakhterehjaogay (I will create a song which will leave you speechless)

The logos of companies such as Mahindra, Zivame, Infosys, Nykaa, Tata and OYO were handcrafted by the Sui Dhaaga team and gifted to the leaders of these brands for their ambition, perseverance and relentlessness.

I firmly believe that only those brands must be partnered with which can add value to a film. I can recall x number of instances where a film, in the past, has associated with brands which had absolutely no relevance with the movie.

Sui Dhaaga in this case as well is an exception. The brands associated with the movie are spot on. Have a look.

The collaboration encourages entrepreneurs to sell on Amazon and reach out to millions of people worldwide. A digital campaign has been launched by Amazon to promote this association. 10/10 to the marketing teams of both YRF and Amazon for executing this brilliantly

Usha International fits organically into the scheme of things in the film. In fact, all sewing machines in the movie are of this brand. According to Harvinder Singh, President – Sewing Machines & Appliances, Usha International Ltd said, the association was a very natural one, based on a joint mission to focus on empowerment and showcase how sewing can be a game-changer that can potentially transform lives”

Like Usha International, Raymond is also an integral part in the film. Sanjay Behl, CEO of Raymond Ltd Lifestyle Business said, “With a vision to train over 1 lakh tailors by end of 2020 through our initiative, the seamless brand integration with Sui Dhaaga – Made in India is an apt fit for us.”

Other than these, there were tons of memes on Anushka Sharma on social platforms. A Sui Dhaaga Challenge was also launched by both the leading actors in which they invited people to create a video in which they had to thread a needle. Artists like Shah Rukh Khan, Salman Khan, Ranbir Kapoor, Karan Johar, Akshay Kumar, Katrina Kaif, Alia Bhatt etc also took part in this challenge and it did create a major storm on social media.

And lastly, social media managers would agree that topical posts have a higher engagement rate. Here are some topical posts shared by the Sui Dhaaga team which will surely bring a smile on your face.

We hope you enjoyed reading this article. Please let us know your views on this in the comments section.