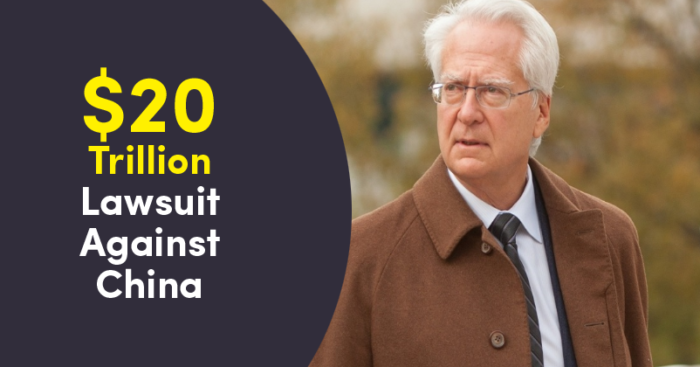 American lawyer Larry Klayman has filed a $ 20 trillion lawsuit against China for the creation and the release of the novel coronavirus that has infected more than 40900 people globally.

In the lawsuit, the petitioners have allegedly accused the Chinese government of developing coronavirus as an illegal biological weapon and for releasing the same “by the Wuhan Institute of Virology, located in Wuhan, China, where the coronavirus outbreak originated,” the report stated. The report quotes the complaint as saying,

Although it appears that the COVID-19 virus was released at an unplanned, unexpected time, it was prepared and stockpiled as a biological weapon to be used against China”s perceived enemies, including but not limited to the people of the US.

Because China has agreed by treaty to outlaw such weapons, these actions cannot be official governmental actions of the People’s Republic of China and are not subject to any possible claim of legal immunity from suit.

On March 23, US President Donald Trump said he is ‘a little upset’ with China over its delay in sharing the information on the outbreak of the deadly coronavirus and refusing to accept a visit by American medical experts to the country ‘out of pride’.

There are now over 49,600 confirmed cases across the US, with over 600 deaths. New York State, in particular New York City, emerged as the hotspot of one of the worst public health crisis in the US in recent memory. Nearly one in every two Americans infected by novel coronavirus is from New York City, which reported more than 5000 news cases on March 23, taking the total to 25,665.

The lawsuit filed seeks compensation from the Chinese government due to its “callous and reckless indifference and malicious acts”. The report quotes Klayman saying, that the Chinese people, “are good people, but their government is not and it must be made to pay dearly”.