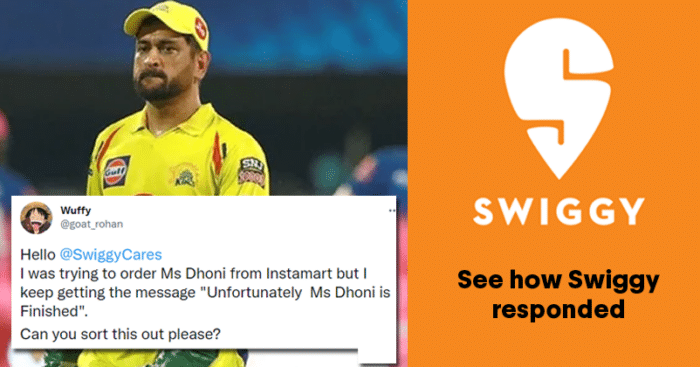 MS Dhoni is nothing less than an epitome of finesse, coolness and sportsmanship in cricket. He has managed to gain a strong fan following over all the years in the game. Whether on field or out of it, he never manages to go unnoticed. But on couple of occasions, even his fans have managed to make headlines with their antics. Here is one such example.

On 6th October 2021, a user tried pulling off quiet an unusual shenanigan. He tried ordering MS Dhoni from Instamart. However, he kept on getting a message stating “Unfortunately M S Dhoni is finished” and he tweeted about the same on a social media handle, asking SwiggyCares to intervene and sort this problem of his.

Hello @SwiggyCares
I was trying to order Ms Dhoni from Instamart but I keep getting the message “Unfortunately Ms Dhoni is Finished”.

Can you sort this out please?

Swiggy, retaliated with the most epic and savage reply stating “Unfortunately they don’t make legends like MSD anymore”
This witty response managed to grab attention with so many responses.

There were hilarious reactions by netizens after this exchange. With memes and replies, the user got trolled by other netizens, questioning his post.

Swiggy destroyed him in seconds.. @SwiggyCares u won million of Indians ❤️. pic.twitter.com/2ILLwpcFK1

Interestingly, a couple of users also used the platform as a measure to show their love for Swiggy. As well as its competitor Zomato.

This reply by Swiggy garnered more than 1200 likes in less than 24 hours and was re-tweeted more than 500 times.