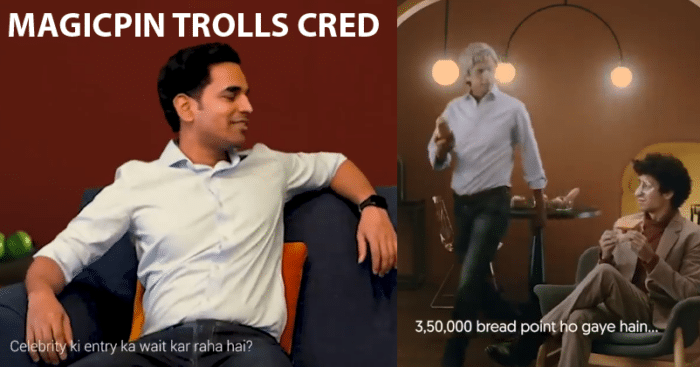 Recently, the popular credit card payment app, CRED, garnered its users’ attention with advertisements around the new IPL season. Bringing in actors including Jackie Shroff and Jim Sarbh, former batsman Rahul Dravid and even singer Kumar Sanu, all the advertisements were super hit. Despite all the fan following, some netizens were quick enough to find out faults from the brand.

Surrounding its CRED points feature, enabled with every transaction, rival brands MagicPin and CashKaro quickly responded back with ‘bread’ and ‘bed’ to tackle the brand. A number of users get lakhs and lakhs of CRED points not know much about how to redeem them. Hence, rivals sought out a way to show their ease of convenience of redeeming points on their own platforms.

Magicpin took the help of actor Vijay Raaz to mock Jim Sarbh’s stunt for CRED, using his calm and down-to-earth personality. If you haven’t seen it here, this advertisement will surely make you chuckle.

Simultaneously, the brand also used Vijay to bring about another point directly digging at Dravid’s angry person in the CRED advertisement. Similarly, the cashback and coupon site, CashKaro, brought out a short film called #CashOverCoins, where users can earn more, collect coins, and redeem coupons. Here’s how it went.

Using a lighter note in comparison to CRED, these brands highlight how subtle tones can be utilized to reiterate the same message. You don’t need gimmicks or celebrities, all you need is a clear concept.

What do you think of these new ads by competitor brands?