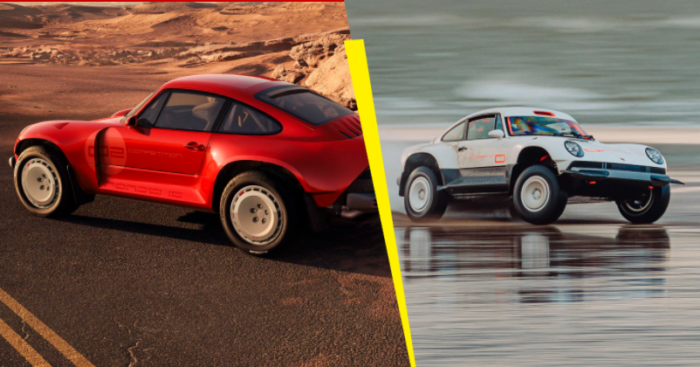 Singer Vehicle Design is an American company that modifies Porsche 911s. The company has been undoubtedly the biggest promoter of the car. However, lesser-known, Richard Tuthill crafts equally desirable 911s. The two companies have now partnered and formed an All-Terrain Competition Study, or ACS for short, unveiled recently, which has showcased the talents of these two companies and the findings are spectacular.

The ACS is a commission from a longstanding client of Singer and it takes clear inspiration from the famous Porsche rally cars of the 1980s, namely the 959 and the 911 SC/RS. I would suggest it’s the former of those two that has the bigger influence, and this really sets it apart from other off-road, 911-based creations that we’ve seen in the past (both from Tuthill and others such as Leh Keen). It looks and is intended to be, ready for the Dakar or Baja, reported Cnet.

This resto-mod is powered by a 3.6-liter, air-cooled flat-6 with twin symmetrical turbos and fly-by-wire individual throttle bodies, with an output of 450 horsepower and 420 pound-feet of torque.

The engine is linked to a five-speed sequential gearbox which allows flat shifting either via the paddles on the wheel or the nearer of two tall levers protruding from the transmission tunnel (the other, predictably, is for a proper hydraulic handbrake). Power is then sent to all four wheels, with plated limited-slip differentials in the front, center, and rear.

The bodywork is made of carbon fiber with the signature Singer sleekness to the way the curves have been wrought. The resto-mod is no less than artwork with all the brilliant work that has been done on it.

Two examples of the ACS have been commissioned for its customer. One is Parallax White for off-road desert-style rallies and the other in Corsica Red for high-speed tarmac events. Though the price has not been mentioned by the commission it can only be that it must be extraordinary since the cars were restored and modified for one client alone.