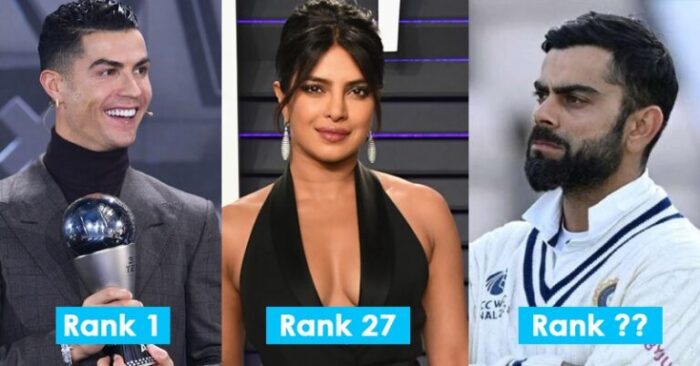 The former Indian captain might have given up the captaincy of the Indian cricket team recently but has always something or the other to amaze his fans with. His popularity, stardom along with his strong personality remains the same for his fans as he gets featured in the Instagram’s rich list of 2021. The official Hopper HQ released its list of Instagram rich of 2021 and Virat Kohli has bagged a position in the top 20s.
The former Indian skipper is at the 19th position with a follower number of 179 million on Instagram thereby charging around $680000 (approx. 5 Crore) per Instagram post. Followed by him, the next on the list is the Bollywood cum Hollywood superstar Priyanka Chopra Jonas who makes it to the 27th position thereby charging around $403000 per Instagram post. When it comes to cricketers, we can’t help but go all-awe as we know that the former South African cricketer and our favorite AB de Villiers makes it to the 76th position on the list.
The top position has been acquired by the world famous professional footballer Cristiano Ronaldo who apparently charges a lumpsum of $1,604,000 per Instagram post apart from being followed by Ariana Grande, Dwayne Johnson, Kylie Jenner and Selena Gomez.

Virat Kohli is not only one of the most followed personality on Instagram but also allover Asia. He gave up his test captaincy after India lost the three match series by 2-1 to South Africa and earlier Rohit Sharma replaced him as the ODI captain. Prior to that, Virat Kohli voluntarily gave up his T20I and IPL captaincy but according to the experts leaving captaincy won’t be hampering his brand value and he will definitely keep on ruling the advertisement world.

In a recent interview with the leading daily, the MD & CEO at Future Brands, Santosh Desai stated that Virat Kohli not being the skipper won’t be affecting his brand value at least in the short run and his relationship with Anushka Sharma will certainly make things easy for him but in the long run, Kohli’s form will be the most important point in picture. Santosh Desai gave the example of former the Indian cricketer MS Dhoni by stating how even now we get to see Dhoni in every other commercial. Mahi is still playing in the IPL and is the only skipper to win three major ICC trophies (ICC T20 World Cup 2007, ICC World Cup 2011 and ICC Champions Trophy 2013). He is also the second most successful skipper of the tournament as Chennai Super Kings has won the IPL four times under his leadership.

Hopper HQ’s Instagram Rich List includes 395 celebrities, sportspeople and influencers. Last year, it was wrestler-turned-actor Dwayne ‘The Rock’ Johnson who topped the list. This year, he lost the top spot to Cristiano Ronaldo, moving to the second place while reportedly charging over $1,523,000 per Instagram post.