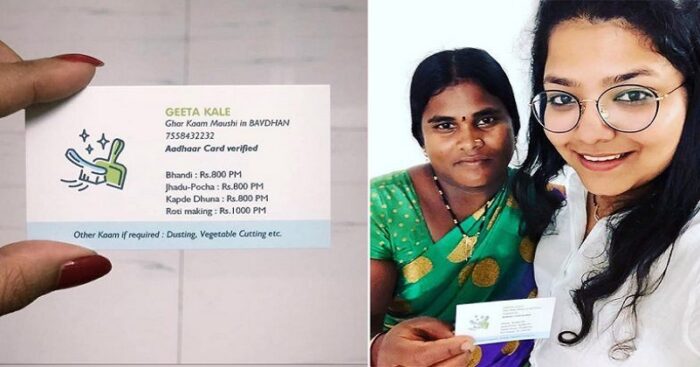 Visiting cards are a very essential and frankly quite necessary part of any professional being. A small piece of paper can leave a lasting impression on the people you meet for business.

Something similar has happened in Pune, and the person who’s visiting card has gone viral for all the right reasons is of house help, Geeta Kale. When Geeta, who works as a domestic help around the Bavdhan area in Pune, lost work at a house, one of her other employers found a creative way to help her.

Dhanashree Shinde, one of Geeta’s employers, saw her upset on losing work. That is when Shinde decided to help her by design a visiting card which soon went viral on social media. Within 24 hours, Shinde was able to design and print around 100 smart business cards with Kale’s name on it describing her work and salary per chore.

Geeta distributed all the cards in the neighborhood and received more than just work. A picture of her visiting card soon went viral on social media and since then Kale’s phone has not stopped ringing.

Recently, Shinde reposted the story on her Facebook page, which was shared by Asmita Javdekar, founder, Creative Nurturer at Aatman.

Shinde has said that ever since the visiting card went viral, Geeta has been receiving calls from all over the country. Her phone has just not stopped ringing. Resulting which, Geeta has handed over the phone to Shinde and asked her to manage all her inquiries.