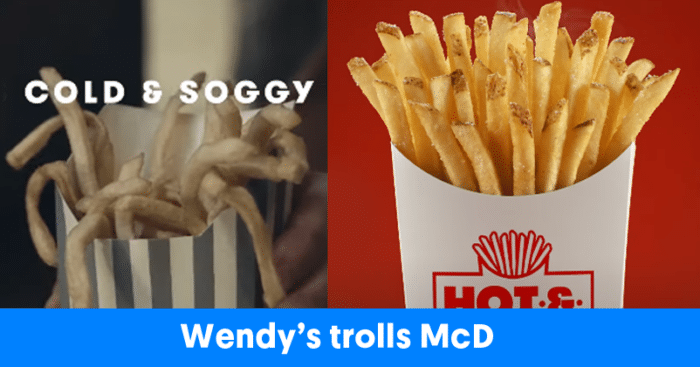 French fries are one of the most popular and one of the most ordered items in any American fast food restaurant. And French fries at McDonalds are a mandatory order with every meal, if not just a necessity. They rarely disappoint you. With a crisp outer covering and a soft and mushy inside, the combination is just right with a dash of ketchup.

Wendy’s has been trying to better their french fries since the past four years. Around 20 different designs were shortlisted. This time they have tried to balance the cut of each fry, keeping a little skin to enhance flavor. The batter too has been modified to maintain crispiness, even after a few minutes out of the fryer.

Wendy’s has had quiet a history in trolling its competitors. In 2018, it had called out on McDonald’s on national television, claiming that their hamburgers have fresh and juicy beef patties, and that McDonalds uses frozen ones.

.@McDonalds So you’ll still use frozen beef in MOST of your burgers in ALL of your restaurants? Asking for a friend.

Even when Wendy’s introduced its breakfast menu last year, it couldn’t resist making fun of McDonald’s and Burger King.

The 4 for $4 Meal: a trayful of mouth-filling glory. pic.twitter.com/JjDOFZVXuP

In India, Wendy’s has inked a strategic partnership with rebel foods to develop and operate cloud kitchens all over the country. The aim is to make it an INR 150-200 crore brand in India.