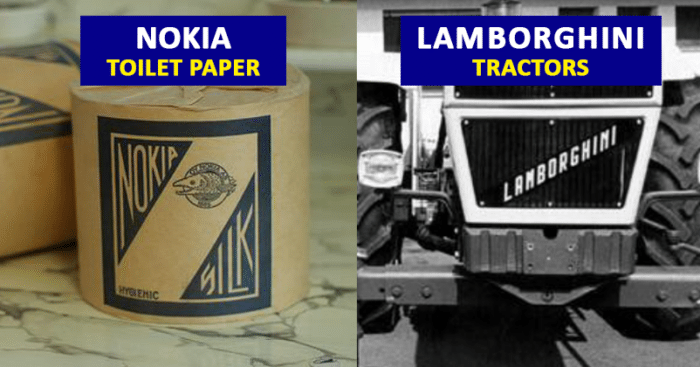 For any brand to attain success it takes years and years of hard work and a vision. It is important for any firm to set a direction and a vision.

This is mainly done by deciding on the range of products and services they will be targeting. This gives companies a much clearer understanding of their target audience and helps them strengthen their plus points.

Sony launched its 1946 and its first product was an electric rice cooker.

Sony was founded in 1946. Its first product was an electric rice cooker.

Here are some early products from 11 other well known companies. 🧵👇 pic.twitter.com/BPlDQNEtTe

Nokia has been known as one of the most famous cellphone brands globally. It has ruled the international market for decades. But did you know that Nokia started as a paper mill in 1865? One of its first products was toilet paper.

One of its first products: toilet paper. pic.twitter.com/Jo00H9fNw6

It started by exporting fruit and fish. pic.twitter.com/LQBPbWbKcJ

One of the biggest toy brands in the world, the Lego Group started selling ducks in 1932.

Lego started its business in 1932.

Its first product was a duck. pic.twitter.com/CnSau2vEMf

Nintendo, which today is one of the leading video-game companies globally was launched in 1889 and was focused on selling playing cards.

Nintendo launched back in 1889.

Its focus was on playing cards. pic.twitter.com/voSQW7bFLh

Nike was first named Blue Ribbon Sport and was focused on dealing with Japanese track shoes.

When Nike was founded in 1964, it was called Blue Ribbon Sports.

Not many will believe this but Lamborghini sold tractors way before it started selling sports cars.

Ferruccio Lamborghini complained about his Ferrari to founder Enzo Ferrari.

Enzo said “you may be able to drive a tractor, but you will never be able to handle a Ferrari properly.”

So he started making his own cars. pic.twitter.com/VzL214Plmt

When Colgate was founded in 1806, it sold soap and candles.

It would be another 67 years before it started selling toothpaste. pic.twitter.com/BnPA7rJGjT

One of IKEA’s early products? Pens.

Matches, Christmas cards and wallets were some of his other early products. pic.twitter.com/sHhj0LQYbt

One of the leading electronic brands, LG, started off by selling facial cream.

LG is well known for electronics.

But it got its start in cosmetics.

A successful facial cream led to many household items, like toothpaste. pic.twitter.com/lIUNmsvkn5

Tiffany & Co. started off by selling stationary in its early years.

As the business grew, it focused more on fine jewelry. pic.twitter.com/btuN6rA6e8

Toyota started off as an innovator in the loom business.

And finally… before cars, Toyota was an innovator in the loom business. pic.twitter.com/xQes7frkrg