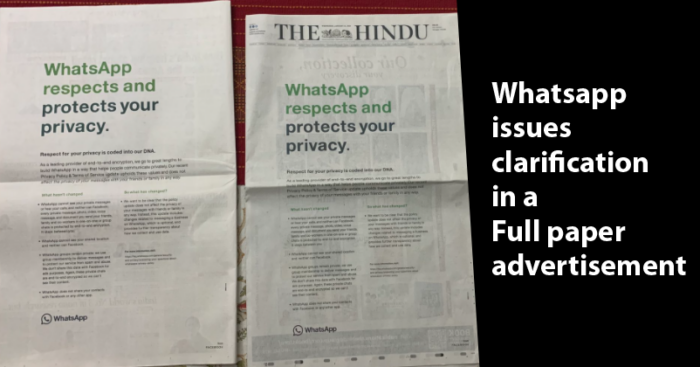 Ever since WhatsApp has issued its updated privacy policies, the company has been receiving a lot of flak. Almost everyone is unhappy with the update and even leading entrepreneurs have come forwarded and declared that they will be no longer using the app.

As a consequence, WhatsApp’s rivals have been getting all the positive attention. Signal and Telegram apps have become the most popular messaging applications in app stores leaving WhatsApp far behind.

WhatsApp has now been trying to repair the damage and trying to uphold its belief that they keep user privacy above anything else. Recently, we all witnessed the full-page coverage of WhatsApps declaration to its users on almost every leading newspaper. The extent to which WhatsApp has gone to clarify indicates that they clearly understand the gravity of the damage.

While the company did this once, no one expected to see these clarifications pop-up the next day too. On Day 2 of full-page clarification issued by the company, it stated in huge fonts, “WhatsApp respects and protects your privacy.”

The ad further stated, “We want to be clear that the policy update does not affect the privacy of your messages with friends or family in any way. Instead, this update includes changes related to messaging a business on WhatsApp, which is optional, and provides further transparency about how we collect and use data.”

Adding on it said, “WhatsApp cannot see your private messages or hear your calls and neither can Facebook: every private message, photo, video, voice message and document you send your friends, family, and co-workers in one-on-one or group chats are protected by end-to-end encryption. It stays between you.”

Many people took notice of WhatsApp’s efforts and posted their copy of the coverage on Twitter, Paytm founder being one of them.

How long we will be taken for granted by such blatant double standards ?
Self claimed ad claiming respect of our privacy v/s actual policy.

#WhatsappPrivacy They are really having a tough time if they have to do this #WhatsApp #WhatsAppPrivacyPolicy pic.twitter.com/Aly9W63w1F

There is only one boss. The CUSTOMER. And he can fire everybody in the company from the chairman on down, simply by spending his money somewhere else ~ #WhatsApp #clarifications pic.twitter.com/1tXE2VF3wh