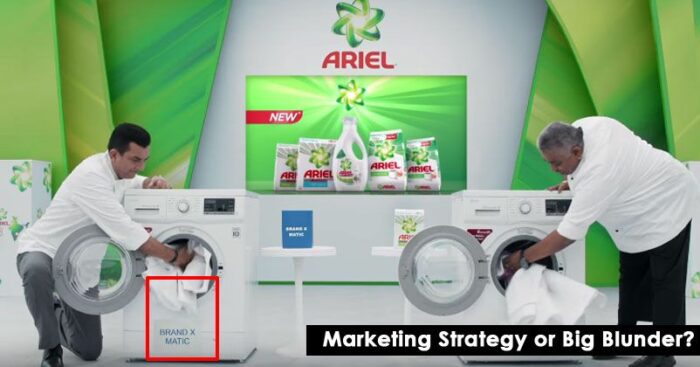 Marketing has always been the most integral part of any brand making. If done correctly it can mark a huge impact and fetch the brands its desired goals. In order to do so many brands come up with various marketing techniques.

Some brands launch a contest some brands come up with a lucky draw. But some brands make a point by taking a dig at their competitors.

Ariel has also taken the later approach but how well planned was it? If you look at their famous ad staring Sanjeev Kapoor & Damodaran, the famous chefs, you would see the flaw.  In the ad, Sanjeev Kapoor is seen asking, ‘Who can remove these tough stains? Popular powder? Or New Improved Ariel?’.

The flaw can be observed through two versions of the ad, the Hindi version, and the Tamil version. The Hindi version has the other powder marked as ‘Brand X’. While the Tamil, Telugu, Kannada, and Malayalam versions have something called ‘Brand X Matic’.

It is notable that Ariel has a product called ‘Ariel Matic’ too, but the aim here is to indicate Surf Excel Matic as the other powder.

So what we are asking is, that why is Ariel calling its competitors the ‘popular’ brand. Is it something that the brand did intentionally or was it just a lack of observation. Ironically, Ariel suggests that the most popular brand is less effective in cleaning people’s white as much as Ariel is.