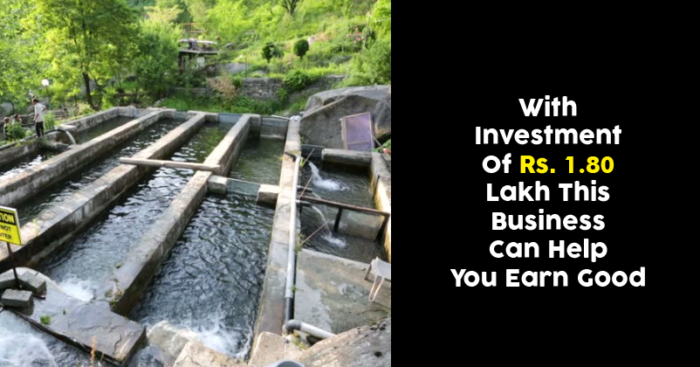 Trout Fish Farming can actually prove to be very successful and rewarding if done rightly. Moreover, NABARD also provides a 20 percent subsidy to start farming. According to NABARD, trout farming can be started with just Rs 2.5 lakh. With the help of the subsidy, you will have to invest only 1.8 lakh rupees by yourself.

Recently, Union Animal Husbandry, Fisheries, and Dairy Minister Giriraj Singh had said that there is immense potential in fisheries in the country and this can result in a five times increase in the income of farmers.

To give a boost to the fisheries sector, the government has drafted two bills and these bills will be introduced in the current session of the Parliament. These bills are titled as National Marine Fisheries Regulation and Management Bill.

Emphasis is being made on the mechanization of fish farmers. There is a lot of potential for fish farming in the country’s 11 lakh hectare backwater. In states where there is saline water, shrimp cultivation will be promoted.

There are pudders, ponds, and reservoirs in more than 25 lakh hectares of land in the country. Out of these, the production is only three tonnes per hectare, which is expected to increase.

About Trout Fishing & Cost Of implementation

According to the NABARD report, trout is a type of fish which is found in clear water. This fish is found in large numbers in some states of India. Among them are Himachal Pradesh, Jammu, and Kashmir, Uttarakhand, Tamil Nadu, Kerala. Infrastructure is also available for trout production in these states. Several incentive programs are also being run by the state governments to promote trout fish farming.

The farming will cost about one lakh rupees to build a 15X2X1.5 meter raceway, while the equipment will come in about 6 thousand rupees, which includes a hand net, bucket, tub, Thermocol box. While the cost will be spent on seed for Rs 22,500 and feed for Rs 1.45 lakh.

If you have taken a loan, the interest for the first year will be Rs 26,700. In this way, you will have to invest a total of 3 lakh rupees in the first year. On which you will get 20 percent i.e. about 60 thousand rupees subsidy.