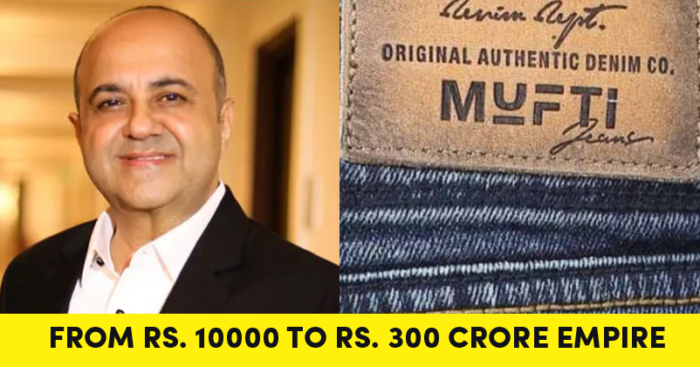 Mufti, an India based men clothing fashion brand, was founded by Kamal Khushlani in 1998 when the entrepreneur was seeking to make some significant changes in men’s wear in that era. ‘Mufti‘ is a Hindi word derived from the Armed Forces of India, meaning ‘Casual Dressing’, as opposed to a uniform.

Kamal believed that the Indian fashion industry was capable to expand globally. With this vision, he launched Mufti in 1998.

He stated that he chose the name because the company was selling different clothes than other brands sold at the time, and he named his brand as an article of alternative clothing.

Kamal lost his father at the age of 19 and hailed from a middle-class family. This did not dim his passion for fashion retail business in any way. But lack of capital was his major hurdle. To make ends meet he had even worked at a video cassette company.

He eventually gathered the courage to follow his dream and borrowed Rs 10,000 from his maternal aunt. In 1992, Kamal started a company by the name ‘Mr & Mr‘ which manufactured shirts for men. Business was going well. But, Kamal felt that there was still a lot of untapped potential in the industry which he could exploit for his company’s gain.

Kamal started Mufti all alone from the rock bottom. In an interview, he said that he used to take several kilos of clothes on his bike and leave it in workshops and then go back to get the finished product for sales. For years, he did all this by himself. He was a one-man army taking care of the end to end business.

In the 2000s, the Mufti grew, expanding from specialty brand outlets to large and multi-brand outlets and large-format stores. Kamal says the reason for its expansion lies in the love and acceptance of his customers. The Mufti sourced its raw materials including Fabricus from various Indian mills including Arvind Mills, KG Denim, NSL, and Mafatlal. Buttons and other items have also been sourced from India and are collected in third-party manufacturing units in Ludhiana, Bangalore, Tirupur, etc.

In 2017, it entered the footwear market and launched men’s shoes in 100 stores in India. The Mufti generated a turnover of Rs 395 crore last year and is expected to grow by 11 percent in the coming financial year.

Today, the company has more than 600 employees on its direct payroll and indirectly employs over 2000 people. It makes a range of over 500 products every season, including jeans, trousers, shorts, athletics, jackets, T-shirts, and more.

Also Read: 10 Things Which Make Mufti The Next Big Thing In Indian Market