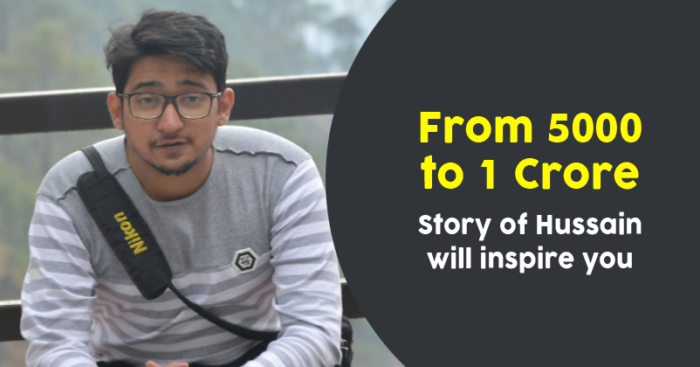 Hussain Saify was only 18 years old when he began his own startup in 2015. Hacker Kernel, one of leading Bhopal‘s startup, provides mobile and web application development services to startups and enterprises all over the world.

What led this, now 22 years old coder to commence his own start-up such a young age is nothing less than an inspiration.

Hussain was only 12 years old when he began to learn C++ and HTML on his own. In 2015 he started out as a freelance web developer which ultimately helped him to pay his own internet bills. Eventually, he got an offer to build an e-commerce website for a local brand, which turned out to the turning point in his life.

The first company he worked with was a fast food joint. The website that Hussain created for the website impressed the owner and his hard work fetched him his first paycheck of Rs 5000. This money he later used as the seed money for his startup.

Hussain has completed a Bachelor’s degree in Computer Application and started Hacker Kernel with just Rs 5000. This company now makes a revenue of Rs 1 crore.

In less than three years, Hussain has built a company that employs 25 engineers who serve more than 200 companies. His clients include Eduzina, Zingfy, and Madcue.

Hacker Kernel works on a time and material model. If a company wants an app developed, it charges for the complexity and the time spent by a set team on finishing the project. The company works on strict SLAs and guarantees delivery.

Depending upon the size and the content, an ordinary website with e-commerce features can cost between Rs 5,000 and Rs 20,000. Charges for UI/UX are added as this involves programming for interaction and makes it easier for the consumer to access the service or product.

With the rising demand in web and app developments in companies nowadays, it seems that the future of Hacker Kernel looks just bright.