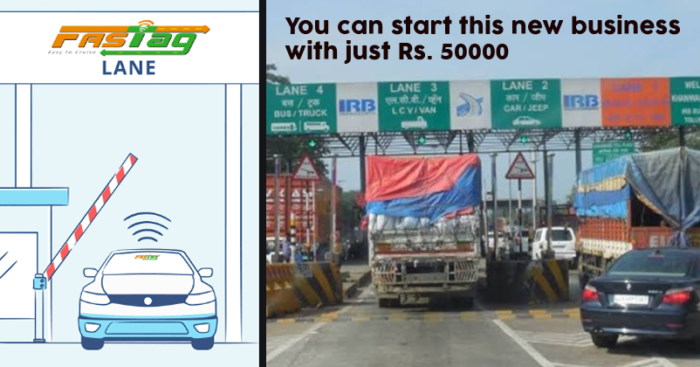 The Central Government has made it mandatory to put Fastag on vehicles passing the toll plaza of National Highway across the country from December 1 next month.

The government has taken this decision so that long traffic congestion at the toll plaza can be avoided, which will ultimately save time and fuel. Also, this will help in controlling the level of pollution. In such a situation, with this decision of the central government, you can also earn from an investment of just Rs. 50,000.

What is Fastag & how is it be used?

Fastag is an electronic toll collection technique that is available on the toll plaza of the Indian National Highways. This technique works on the principle of Radio Frequency Identification (RFID).

Fastags are placed on the windscreen of the vehicles so that the sensors on the tow plaza can read it. When a vehicle passes the fast plaza at the toll plaza, the toll charge is automatically cut. Vehicles do not have to stop for this. Fastag issued 1 time is valid for the next 5 years. The business of selling Fastags

For this, any Indian citizen can apply who has experience of working in the market. However, preference will be given to those who currently work as RTO agents, car dealers, car decorators, transporters, PUS centers, fueling stations, insurance agents, point of sale agents.

To become a point of sale agent for Fastag, you will only need 3 things. First of all, you have little knowledge of computers. You must have at least 1 laptop or desktop, printer, and biometric device. Together you have the ability to invest at least Rs 50,000.

It is compulsory to install Fastag on 4-wheelers or more wheels on highways across the country. In such a situation, you can sell Fastag to those vehicles which pass through the toll plaza of National Highway after December 1 and there is no Fastag on their vehicle.

Also Read: This Business Can Earn You Upto ₹60 Lakhs With An Investment Of Just ₹1 Lakh