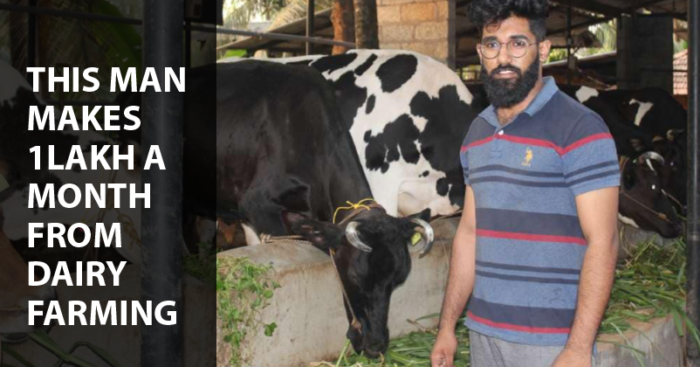 Science can do wonderful things for mankind. So when this engineer from Malappuram, Kerala decided to convert his love for science and animals into his passion, things definitely turned around for the best. 25 year old Jamsheer is a BTech graduate. He has specialised in dairy farming but knew all along that its theoretical knowledge wouldn’t be enough.

In 2013, he joined the Kerala Veterinary and Animal’s District in Wayanad. He wanted to upgrade his theoretical and practical knowledge about dairy farming and hence even bought five goats and two cows to develop a sort of mini-farm at his home. He soon established a PCM farm with the help of family and a small loan in 2017.

How Does He Conduct Dairy Farming?

Jamsheer opened his PCM farm in 2017 in Kizhissery district of Kerala. He owns 40 cows from which 28 cows produce around 300 litres of milk every day. This helps him connect to local suppliers on a daily basis from where he earns his money. It goes up to around Rs. 1 lakh per month.

The Kerala Co-Operative Milk Marketing Federation (KCMMF) helps him reach small houses and other towns to sell off his milk. This is under a milk supplying unit called Milma. This helps him connect with shop owners and big suppliers as well.

How Do The Cows Retain The Quality Of Milk?

In his farm, Jamsheer makes it a point to keep mix breeds of cows including Jersey cows, Holstein Friesian cows etc. The grass fed to the cows are grown by him itself, wherein these animals are also provided with a fresh supply of water. Proper air circulation is also provided to the cows with a ventilation system, cooling fans and even mists. He also puts on some good music once in a while as it is said to help the cows milk better.

Jamsheer also helps the youth in starting something of their own with small capitals. His entrepreneurial spirit is definitely admired.