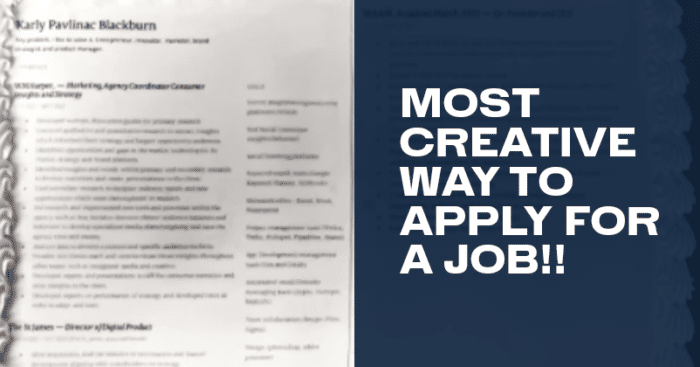 While everyone involved in the corporate world wants their resumes to stand out and be recognized, a resume of a woman from North Carolina, USA takes the cake! Literally.

27-year-old Karly Pavlinac Blackburn applied for a job at Nike in one of the most distinctive manners. She got her resume printed on a cake and had it delivered to Nike’s worldwide headquarters at Beaverton, Oregon!

With her heart set on finding a job at the apparel, accessories, and sports equipment multinational, she wanted to somehow get the company’s attention to her resume.

Her decision to do so, came after a friend of hers suggested that instead of going the traditional way of sending her resume via email, Karly opt for something different. She started brainstorming with her former colleague Trent Gander for creative ways of getting her resume in the correct hands, as she knew it wasn’t exactly hiring season at Nike.

She then zeroed in on the idea of printing her resume on a cake and sending it to Nike’s Head Office. 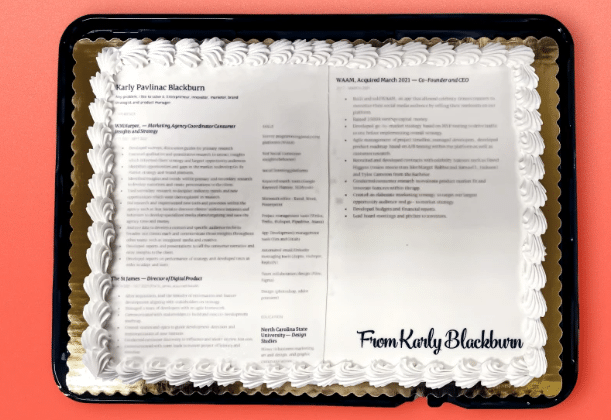 On doing some research, Karly sent the cake on a day the head office was celebrating JDI (Just Do It) Day. Prominent names like LeBron James and Colin Kaepernick were present at the event.

“I knew navigating Nike’s large campus was a feat, but combining a giant party with tons of people on top of that adds another layer of complexity to this delivery,” Blackburn explained in her post on LinkedIn, which garnered thousands of comments.

Karly placed an order at Albertsons Grocery Store through Instacart. There she spoke to Denise Baldwin, who understood her request and assured her of delivering the cake where it had to reach.

Denise deserves a special mention, as she is a single mother to three and pregnant with her fourth child. It took her a lot of effort and persistence in locating the office and getting the cake to the right person, with a child in one hand and the sheet cake in another.

The cake resume became viral after Karly put it on LinkedIn. This had the internet divided, with many appreciating her idea’s originality and many calling it a gimmick.

Whether Karly lands a job at her dream company, one will have to wait and watch. But the edible cake will be remembered as one of the most creative resumes, the world has ever seen!