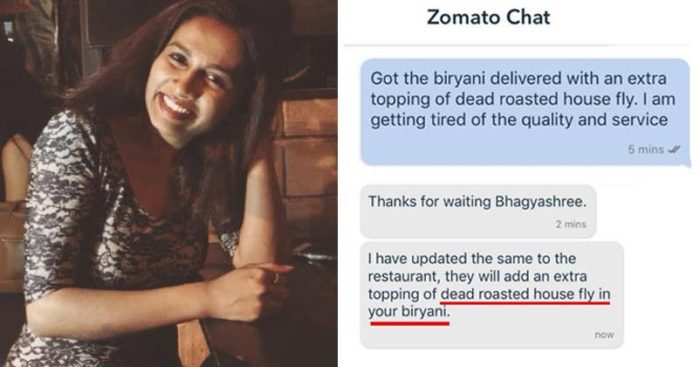 There is no doubt that Zomato is popular for its quirky replies to customers. Last month, Zomato created a buzz online when a Mumbai resident and Zomato’s customer care executive in chatted in shuddh Hindi and their conversation went viral.

However, the latest conversation between a Delhi woman and Zomato executive is creating news for a different reason. Bhagyashree, a Delhi resident who had placed an order for Biryani saw a fly in her meal and being disappointed, she decided to share the matter with the executive at Zomato and wrote to the customer care complaining about ‘extra topping.’

She wrote, “Got the biryani delivered with an extra topping of a dead roasted house fly. I am getting tired of the quality and service.”

Zomato executive responded to her politely but mistakingly asked the restaurant to add one more roasted fly on her order. He apologised and said, “I have updated the same to the restaurant, they will add an extra topping of dead roasted house fly in your biryani.”

You can check these images to read clearly: 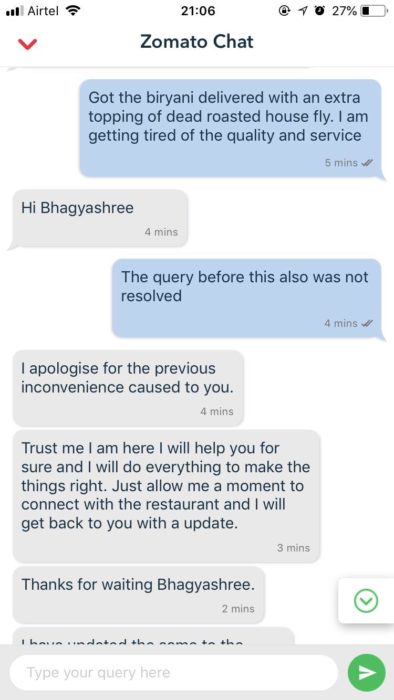 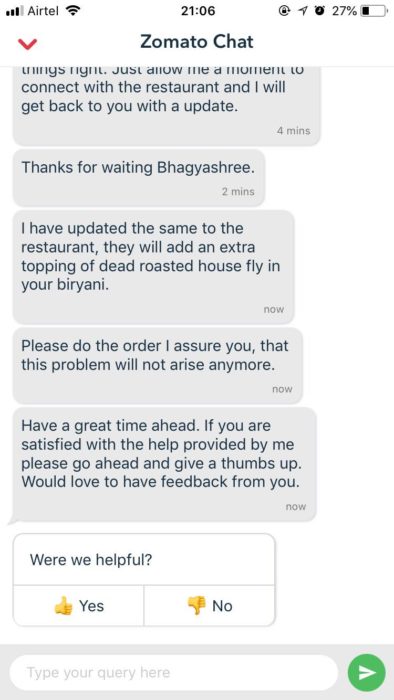 Everyone had a good laugh about this.

You got to give to these guys for managing adversity.

You got to give to these guys for managing adversity. Though I bet this guy is going to get roasted despite saying sorry. #roastedmondays

They can’t be serious?

Whatever it was, made my day

Whatever it was, made my day for like 5 minutes. Now I am hungry

Chatbot will learn. Feed him more data, it will learn to deal with humans eventually.

Even the customer had a laugh about it.

I understand it’s a Monday and it’s an honest mistake. But I did have a good laugh.

Bhagyashree even requested Zomato not to fire the person.

Also, please don’t fire this person. Whoever it was, did apologise. 😇

Well, we don’t know whether it was a mistake or a new tactic to get attention but Zomato has done it again by making some headlines.