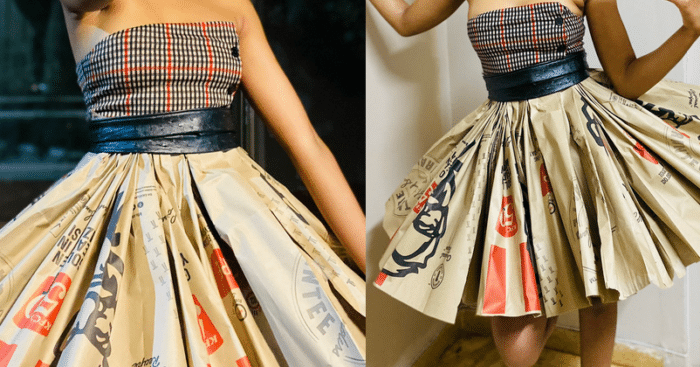 The internet has become one place where everyone from around the world is connected under one roof. What happens in the west goes instantly viral in the eat as well. While many works really hard to make a name for themselves, some just have their lucky stars to thank.

But one cannot deny that there are many with real talent who are influencing people in the best way possible. To everyone’s surprise, people are able to find new ways to get notices.

A fashion designer and blogger from South Africa is one such recent example of this. She has gained the attention of social media users for her creative take on sustainable clothing.

NokuzothaNtuli recently went viral when the image that she shared on Twitter went viral. In the image, she can be seen wearing a dress made from recycled KFC packaging that has left people stunned.

Decided to make this dress for KFC from recycled KFC packages to show how much of KFC super fans we are.#KFCSuperfan @KFCSA #KFCDesigns. ❤️🤍🖤 pic.twitter.com/XewkWc8Hdu

Her post went viral almost instantly with over 13k likes on her post, her dress was so unique and intriguing that even KFC South Africa decided to comment on it.

All this fresh drip, we were never ready👌👌

Earlier in November, KFC South Africa had started a marketing campaign by the name #KFCSuperfan. The participants had to share a message, pic, video, dance, song, or a poem, ‘anything that proves your status!’

Congrats & shout out to our 11 winners who added a few herbs & spices to their #KFCSuperfan entries & really showed us how much they love KFC!
Not only do they walk away with KFC for a year but the top 3 also get Siyabonga – R50k, Mrs Jabu Pule – R20k and Nokuzotha – R10k!! 🔥 pic.twitter.com/MZ2J2FLgwv