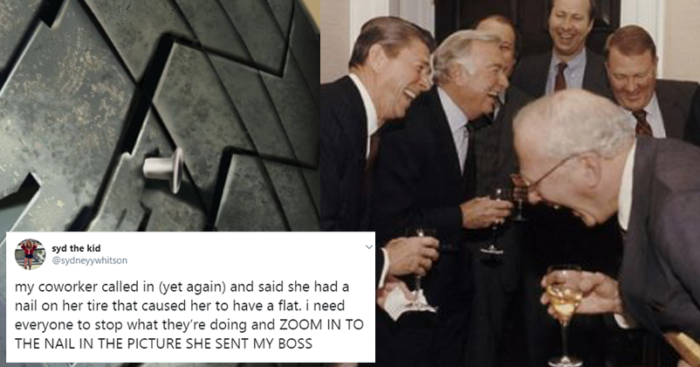 Sometimes, it’s hard to move from the bed in the morning and get ready for the office. And in such times, what do we tend to do? Find excuses! :p From not feeling physically well to an urgent family function, we have all been to a place of exploring ways that could prevent us from working.

Recently, an incident occured where a very creative woman sent a fake tyre puncture image to her boss to avoid work. The event got viral on Twitter. Read the full story below.

Do not want to work? Fake Tyre Puncture To The Rescue!

@sydneyywhitson posted the picture her colleague sent to the employer, on Twitter, that displays a tyre puncture, an excuse to ditch work. The photo is obviously fake but got viral instantly.

my coworker called in (yet again) and said she had a nail on her tire that caused her to have a flat. i need everyone to stop what they’re doing and ZOOM IN TO THE NAIL IN THE PICTURE SHE SENT MY BOSS pic.twitter.com/4NcJGuvF4F

Here’s an actual picture you can use next time pic.twitter.com/v0QqrymGUc


And the most real of all was..

Here y’all go.. Let y’all bosses know the reason y’all are running late is because y’all tire had a nail, puncture or gash in it and you’re at the tire shop trying to get it fixed…. You guys are all welcome pic.twitter.com/wxgyaGdR2i


People have been commenting on the lazy nature of the woman as the same picture is literally the first image that pops up while google search.

She literally used the first image that came up when u ask “how to fix a tire with a nail”
Lmao pic.twitter.com/8vhSlLvluP


And it didn’t end just there.


..with a blend of originality

If y’all need something original, here you go pic.twitter.com/svewxYeXdd


The never-ending Twitter thread roasted the situation at full length. But, we are still unaware of the mindset of that woman who did this and reports say that it was a Saturday and we all know how lazy weekends are!

So, let’s not judge and keep the photos as future references. :p