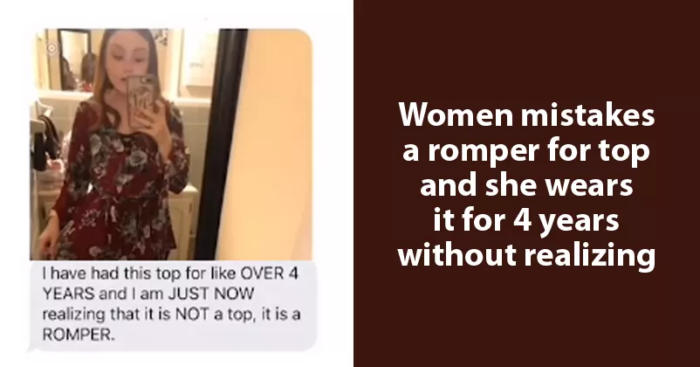 How often do you come across some dresses that seem too difficult to wear and carry about? This woman had the same horror when she realized she was wearing a jumpsuit wrong for all these years, as her pant hole kept sticking out. She was apparently wearing the jumpsuit as a top.

Sharing a hilarious video wearing the top and a chat which seems to be with a friend, the mum declared that this is how she wore the top on Christmas Eve 2017. Apparently, one of the pant holes was falling out which she assumed to be a design of sorts. Turns out, it was a romper!

As per the chat, it doesn’t make sense how the woman did not realize there were 2 leg holes instead of one. All those years, she had been putting both her legs through one leg hole! Her friend remained as amazed as her, chuckling at her stupidity! But to err is to human it seems!

And no she wasn’t making this up! A number of comments were posted on this video where users sympathized with her hilarious situation mentioning that most of us had gone through similar experiences. Some when we were young and others as we age! This seems to be one of those instances and we’re glad that she finally figured it out without embarrassing herself further.

Have you ever been in a similar situation?