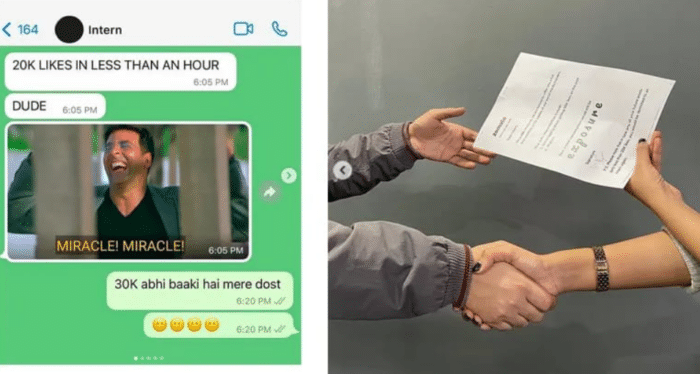 When it comes to job employment one can bag it only when he or she is impressive enough and manages to galvanize the executives in the HR department and Senior Management at a company. But recently an instance with one of the leading brands in the current times, Zomato turned out to be the odd one out. Recently this top food delivery company made the most unconventional offer to one of its intern to join their social media team on several requests by none other than the Instagram users.
Earlier, Zomato took to LinkedIn to share this unique story of this intern who is apparently the co-admin of its Instagram handle. What the Gurugram-based company thought was “the lamest idea ever” helped the ex-intern bag the job of his dreams.
The former social media intern planned a full-fledged campaign full of wit, pun and humor that showed food items with their names on December 8. The post went somewhat like this, from sev puri and delete puri to word play on bay leaf’s desi name tej patta, which recieved a crazy response from the audience and went pretty viral on social media, especially on Instagram. Soon this post fetched the attention of the leading food delivery company, Zomato which added another feather to the cap. Zomato added a little twist to the post by stating, if the post receives more than 50K likes, they will be offering a full-time job to their social media intern, and thereby they pinned the comment to bring it to the public notice.
Numerous supportive and encouraging comments poured in thereby flooding the post’s comments section and the post also managed to get 50K likes within three hours which led the company to offer their intern a full-time job as a social media coordinator.
Let’s have a look at the post that did such a miracle!

Zomato also sent a pretty interesting and humorous note referring to their former social media intern that read,
Dear Intern,
On public demand, we are forced to offer you a full-time position as co-admin of our social media handles.
Your daily responsibilities include:
1. Not bragging about getting 50K likes on the post.
2. That’s it.
Your annual compensation will still be ‘exposure’.
P.S.: Please note that in case any of your future posts get less than 20K likes, you would be demoted to an intern again.


In its note on LinkedIn, Zomato joked on how the worst part is that their ex-intern hasn’t stopped talking about his 50K achievement.

Instances like this are nothing but a sheer example of how dreams can come true miraculously!