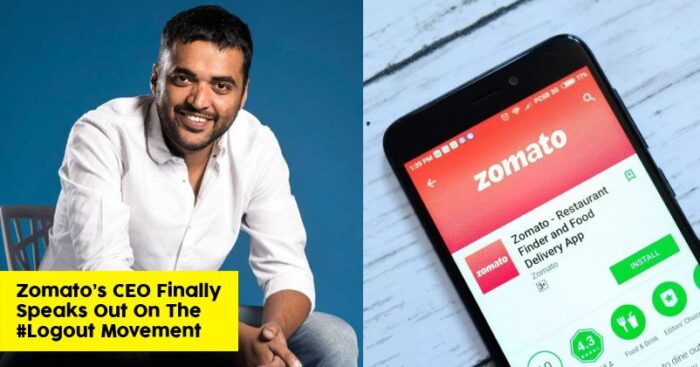 Recently, more than 1000 restaurants have pulled out of the reservation and membership-driven dining apps. These apps include EazyDiner (Prime), Zomato Gold, Dineout, Nearbuy and Magicpin. Restaurants are taking this step in order to protest against the discounts being offered by these platforms.

On August 15, led by the National Restaurant Association of India (NRAI), the restaurants decided to log out of these online food apps starting the #logout movement.

NRAI has come together to detox consumers from discount addiction.
The move is being undertaken to protest against aggregators who have distorted a vibrant marketplace by aggressive discounting and predatory pricing.
Restaurateurs, it’s time to #Logout.#CozWeDeserve pic.twitter.com/bI8XUQ4MtX

In response to the protest, Zomato‘s founder and CEO Deepinder Goyal took the help of Twitter and requested restaurant owners to stop the logout campaign. He has also urged the restaurant partners to have a dialogue and discussion before taking such a step.

Deepinder Goyal had tweeted, “In the interest of consumers, we request restaurant owners, to stop the logout campaign, and have a collaborative discussion with internet aggregators for finding a sustainable way forward.”

5 – In the interest of consumers, we request restaurant owners, to stop the logout campaign, and have a collaborative discussion with internet aggregators for finding a sustainable way forward.

Zomato had launched Gold Membership in November 2017. This allowed the customers to get either 1+1 on food or 2+2 on drinks or vice versa from partner restaurants.

Apps like Dineout and nearby also serve the similar purpose of providing great deals or heavy discount offers to its consumers.

These deals have reportedly not just helped the consumers but also facilitated an increase in footfall at the restaurants. So why have the restaurants revolted against these apps?

All the online food apps have agreed to have a dialogue with the restaurant owners regarding the problems they are facing. NRAI will be meeting with the companies on Monday to straighten out differences and find a middle ground.