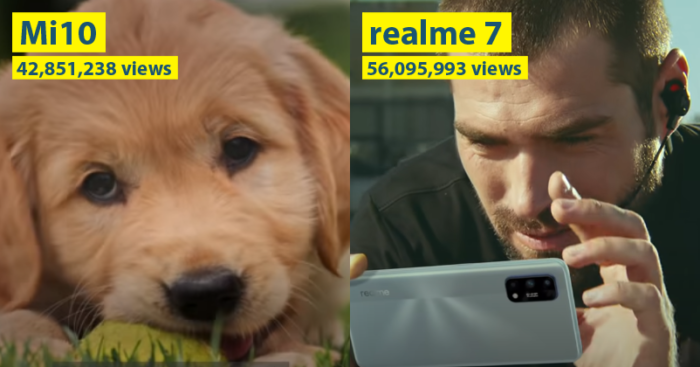 Youtube become an important platform for all major brands to make an impression on the market with regular updates and ad campaigns.

Vidooly has recently published a report that shows the top 10 most-watched Indian ads on Youtube in September 2020.

The ad by Oppo Mobile India is giving many of us chills with its resonating music and of course MS Dhoni. Though the ad is for the new OPPO Reno4 Pro, the storyline and the composition is something that has made it the most-watched ad on youtube in September. Since its launch on 23 September’20, it has received 83,127,949 views.

Xiaomi India has introduced a pretty interesting ad for its smart TVs. MiTV has become a very popular choice in India and with this innovative ad, the brand has suggested just that. It was launched on 29 September’20 and has received over 122,917,284 views.

With this ad, realme India has introduced the new Realme 7 & 7 pro smartphones which come with a Sony 64MP quad camera and India’s fastest charging technology. Launched on 3 Sep’20, the ad has received 56,094,921 views so far.

Samsung‘s Galaxy A71 comes with an all-new ‘Quick Switch’. This feature lets you switch from your private to the public gallery with a double click. Since 8 Sep’20, the ad has over 47,634,272 views on Youtube.

The Samsung Galaxy Watch3 was unveiled on Youtube on 2 Sep’20. The much-awaited video received 44,305,050 views since its launch.

Oppo Mobile India has launched the Sleekest Phone of 2020, Oppo F17 Pro. The phone comes with a 7.48mm Ultra-Sleek Body and not only comprises of 6 AI Portrait Cameras but is also packed with powerful features such as the Super AMOLED Screen and 30W VOOC Flash Charge 4.0.

Take a look at the all-new Ford Freestyle Flair with its latest campaign. The new Flair comes with sporty accents, BS-VI compliant powerful engine, and ARP (Active Rollover Prevention). Launched on 3 Sep’20, the video has 35,435,656 views so far.

Also Read: 10 Most Watched Indian Ads On Youtube In August 2020